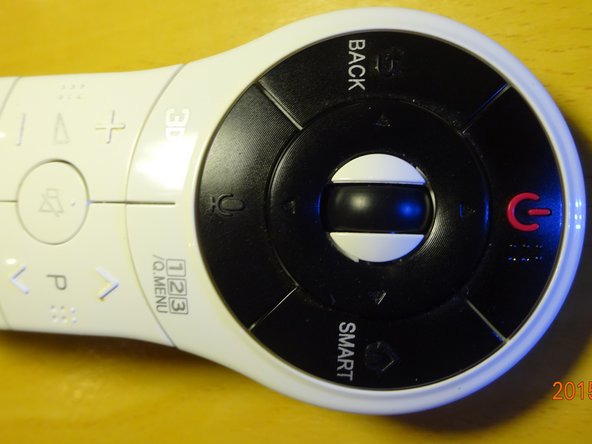 The remote I have is for a 47LA690T LG TV bought in Phuket Thailand. It came with a "Magic Remote" that is mostly white with a black circular part at the front which has a rubber wheel in the centre. I also have a one year newer version TV with a different "Magic Remote" which is all black and oval shaped. The wheel on that one does not suffer from this problem.

The wheel is used to change analogue channels on the TV and so gets used a lot. After time, the rubber becomes loose and slips on the plastic gear on which it is mounted.

There is another guide on iFixit by "Schdeffan" titled "Repairing LG Television Magic Remote Control AN-MR 400 Scrollrad". You can also have a look at his method. It was his method for a slightly different remote that allowed me to fix my remote about two years ago. Now, today, I had to repeat the process that I used and decided to share the photos that I took at that time.

thanks for the guide mine fell in water so had to disassemble it to let it dry out, i gave it a IPA bath then let it dry for 36 hours , now it works fine.

thank you for the guide.

I didn't take mine apart I just lifted the rubber with the smallest precision screw driver n applied a minute spot of super glue remote still working after 7 years. But can anyone tell me where I might buy the complete wheel for my other remote has it's smallest end has snapped off i glued that but i dont think it will last very long

That sounds a good idea - lifting the rubber to one side!

Regarding the small broken part, you might have to drill it out and insert/glue in a replacement axle

Did that but it seems to have snapped off again. Seems too thin for heavy thumbed people. Maybe they should have used a different potentiometer as thumb wheel axle very flimsy and don't want to have to buy another one of LG”s overpriced Magic Remotes.