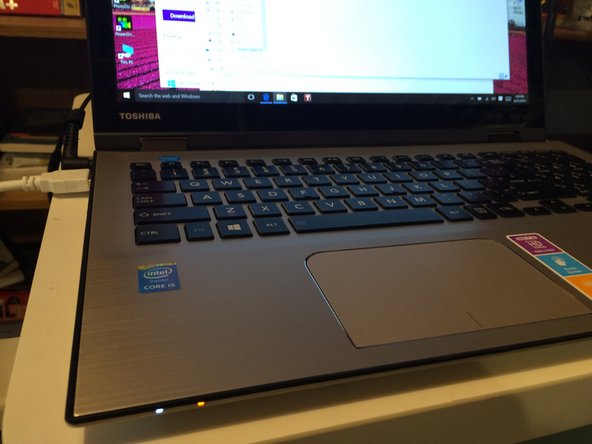 How to remove bottom panel on laptop so that HDD can be replaced with SSD. (Or upgrade RAM memory etc.)

Thank you so much!! The only videos I found were for other models (with hidden screws, misc cables, etc.) Very cool of you to post this for us that have the same model!

I used the Easus free disk cloning software to set up my SSD, and then followed your instructions, and everything works just great! Thank you for these instructions.

I have the p55w-5813 with a factory mSATA, and this was GREAT. . Two issues, though. . First, *THERE ARE SCREWS UNFER ~BOTH~ REAR FOOTPADS*. I removed the one shown in your guide, endind up with the specified 10 screws. I even removed the other footpad, just in case. . Unfortunately, the white sticky bottom must have seperated from the pad, so a quick look showed a smooth white surface. I proceeded to remove the cover, and it was only when putting the bottom cover back on, that I saw the that corner had been secured identical twin screws under the footpad. . The cover had came off because the think plastic/metal snapped around them when I removed it with gentle pressure. I wish I had a way of attaching a picture to illustrate the placement of the screws and the chunk it took out. If you would update your instructions where you say there aren't any under that footpad, you'll save a lot of people (at least with my specific model) from broken bottom covers.

Second issue (my first was too long to cover both)...

The other issue is to include that the white cable that goes to the power button needs to be reinserted into the adapter on the cover just before snapping the cover back on.

Thank you for a great guide. It literally took me 20 minutes to remove.

Misty, thanks for the info (and the great photo!) I have updated the guide. Sorry my guide mislead you, its almost like Toshiba wants that kind of confusion! :-(