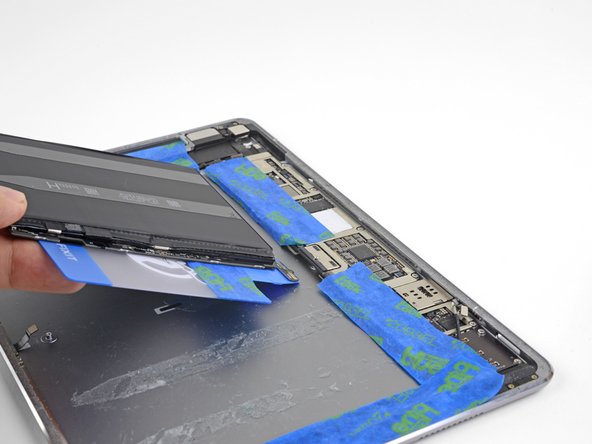 This guide is currently being revised with an updated procedure.

Follow this guide to remove and replace the battery for the iPad Pro 9.7”.

If your iPad is not the cellular enabled model, skip the first step.

Because there are steps in this guide where the battery may remain connected to the logic board, leave the iPad on until the battery is completely discharged (the iPad turns itself off) before attempting this guide.

For optimal performance, calibrate your newly installed battery after completing this guide: Charge it to 100% and keep charging it for at least 2 more hours. Then use your device until it shuts off due to low battery. Finally, charge it uninterrupted to 100%.

Take extreme care when sliding the battery disconnect or under the logic board. There are very fragile pins for the smart connector that may be damaged.

That’s an excellent guide! I had to replace both the battery and the display. The iPad seems fixed and boots but shuts down after 3min/180s due to "no successful checkins from com.apple.thermalmonitord since wake". The other services listed in the dump all report successful checkins. I have no idea whether that rather indicates something went wrong with the battery replacement or with the display exchange (and associated home button transfer). A hard DFU didn’t help.

Did you ever get this fixed? I’m running into the same thing.

Hello, I tap the home button, Apple is very picky about the exchange. Just try the original home button if it is still available.

Used this guide it is missing the part where you need to remove the screw from the battery post. Post needs to be reissued. I have now tried 3 OEM batteries including reinstalling the existing one and all cause the iPad to go into a restart loop I think iOS 14 devices are firmware locked as all show 100mAh on Coconut Plus which probably causes the restart loops. Even completed hard reset and total factory reset however still stuck in restart loop