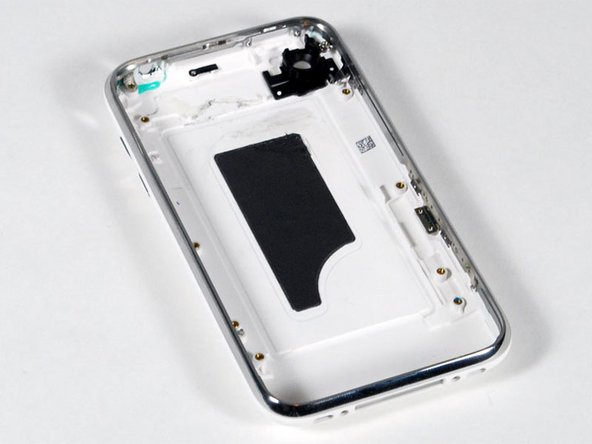 The plastic rear half of the iPhone.

I did it, including the removing of the bezel from the old rear panel and gluing it again on the new one.

It would be helpful to indicate that it could be necessary to reactivate the iPhone when finished, by pressing the Home an Power button for 10 seconds... And also perhaps to precise that the connector 3 must simply be pushed forward, as it is just slipped into the connector, on some models at least.

This is an awesome and easy to follow guide. I just reassembled my 3GS and have a couple of issues to resolve. The touch screen is the main issue. The touch screen works, but the calibration is off. Takes a few swipes to get it out of sleep mode and the keyboard response is haphazard. Any ideas what can be done to fix this. The other issue is SIM slot. No problem inserting the card, but can not pop it out. I know this has to do with the spacer because my back cover did not have a pre-drilled hole. I drilled one, but had problems seating the part. I figure I will fill the hole with plastic epoxy and re-drill unless someone has a suggestion. Perhaps I should order a new back with the hole drilled.

I was a bit daunted by the 'very difficult' rating of this one but went ahead anyway. Complete success, took me about 2 hours altogether as I went pretty slowly through the teardown. I am 61 years old, a woman, and have never taken a phone apart before. Just thought this might encourage some others, but extreme care is needed.

Guide so should be completed all the way around for reassembly.

My iPhone 3GS had some issues with the mute button and on/off switch (not working properly) that I couldn't fix.

Also after reassembly the front metal bazel is not properly adherent as to the real panel as it was in origin.

I did it, thanks to you guys! Had to change the backcover, the power button and the mute button of an IPhone 3GS and thanks to you it was a success. Struggled a few times. Took me a long time to detach the battery from the old backcover. And the end of the disassembly there are a few steps missing in the tutorial since I had to transplant every little bit in the new backcover but I figured it out. When reassembling, steps 22-20 almost made me cry - $*&! mute button! Now the phone can be used again although some buttons do not work that good (tactile feedback is missing on the power and the volume buttons). By the way: it took me almost six hours to take the phone apart and put it back together. I'm still happy!