Roger Queen is a North Carolina native transplanted to Lafayette in 2009. He grew up in Asheville Nc in the beautiful smoky mountain area. Roger was very much into outdoors and was never really into technology other than some video games at times. In May of 2006 Roger had an ATV accident where he wrecked the 4-wheeler off the edge of a mountain and fell 60ft. This left Roger with a shattered spine broken ribs and paralyzed from the waist down. After going through a lot of in patient physical therapy and learning to adjust to his new life in a wheelchair. Roger went home and quickly realized he would no longer be able to do a lot of the things he use to. So that year Roger got his first computer and quickly became self taught in almost every type of computer issue a person could come across. In January of 2009 Roger moved to Lafayette La where he met Matthew Brown. At the time Matt was repairing and reselling iPhone 2g and 3g models. Roger was quickly intrigued by the idea to not only repair the mobile devices but also customize them. That year spawned a friendship and a journey between Matt and Roger. They started in 2009 doing mobile repairs and soon upgraded to a flea market booth. But in 2012 they opened their first brick and mortar store front in Lafayette la called iPhone Repair 4 Less. Together Matt and Roger have repaired over 30,000 devices. Today iPhone Repair 4 Less is a staple in the lafayette community for all kinds of mobile device and computer repair needs! 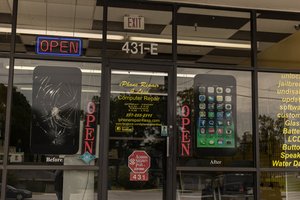