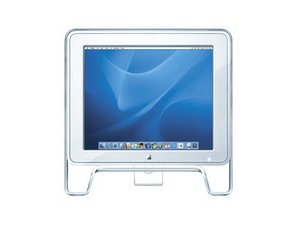 There are weird noises coming out of the display

Display makes abnormal sounds that imply it is not functioning correctly.

These faint sounds are perfectly normal and occur typically when the display is heating up or cooling down.

Cannot connect to a PC

Connector for the display does not match the receiver for the PC.

Unfortunately, Apple only uses an ADC plug to connect to their displays. ADC is a plug exclusive only to Apples so if you really want to connect this display to your PC, you will have to buy a DVI to ADC adapter from Apple.

You can purchase it here: DVI to ADC Adapter

My display is dim

Screen is dark and hard to see.

If your display appears dim or if it looks like the backlight has gone out (you can barely still see the image), the most likely failure was the inverter. The actual backlights rarely have problems, inverters just die quite often. If your backlight fails intermittently while moving the display, the problem is with the inverter cables which connects the backlights to the inverter.

My computer is restarting to a blue or gray screen

Computer starts with a blue or gray screen.

If after startup your display shows only a persistent blue or gray screen with possible variations of: Apple logo, spinning gear, spinning globe, or a folder with a flashing question mark.

Some of the steps specified below may reset settings.

1. Perform a shut down procedure on your Mac. If your computer is frozen, for your mac to power down by holding the power button for several seconds

2. Make sure all peripheral devices are disconnected. These include printers and external hard drives. All you should have connected are your screen, a mouse, and a keyboard.

Note: If these steps for startup work for you, this means that the peripheral device(s) or even installed software causing the issue of the blue or gray screen. To figure out which device is causing the gray screen, you can connect one device at a time and restart your Mac to test it until you find the problematic device.

First make sure you have Mac OS 9.2 or higher, if you don't have access to one of these versions, you don't have internet and can't see this page anyway.

After your OS is updated, turn off your display. Then unplug its power cord from the electrical socket and replug it back in. Now turn it back on. The resolution problem should be fixed.

Power button blinks in a certain pattern when display is on.

The display is detecting an incorrect video format or an unsupported resolution. Verify that you are using compatible equipment, and restart your computer.

The display is detecting a backlight error. Check your display's power connections and restart the computer. If the issue persist, the most likely cause is a failed inverter. If your backlight fails intermittently while moving the display, the problem is with the inverter cables which connects the backlights to the inverter.