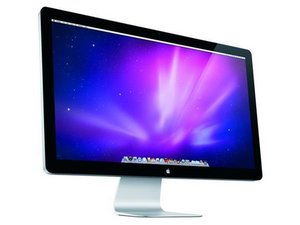 Low light or no backlight on LCD

I have an 27" LED Cinema Display and when i connect it to my Macbook Pro 5,1 and connect the power supply i can only see the display on very very low light, i have tried changing the resolution and the light in the system preferences

How does it work with other computers?

i know your post is old but i have the same problems and and test it with success ...

1) down the luminosity to the minimum.

if you find the solution for my problems, dont hesitate to make a answer.

I have to say that Jeremy's solution also worked for me. I picked up a "no-display" 24" Cinema Display for $40 on the off chance I could fix it. Setting brightness to zero, unplugging, and re-plugging fixed it. Before that, you could only see graphics by shining a bright light onto the display. Thanks!

@sg1archive can u explain how did u fix it?

The backlight with this model is built into the LCD display assembly and draws power, through a separate backlight cable, directly from the device's power supply and depends on the logic board to provide backlight information.

Diagnosing the failure in this would require you to use a digital multimeter, set to DC, to check for 23.3-25.7 V between the chassis ground and the 24 V test point on the logic board. If no voltage is present then the power supply is likely bad. If proper voltage is present then you should inspect the LED backlight sync cable, which is attached to the back of the LCD panel, for damage and then reseat it. If the issue persists then the next step would be to replace the LCD panel or logic board, in either order since they are both costly components.

Hopefully that gives you something to go on.

Here is a teardown for the 27" Thunderbolt display, the backlight portions of the internals are very similar to your model.

LikeARabbit: Could you indicate where on the logic board the 24V test point is located? I've got the same problem as the OP, and it's time to get my toolkit out.

Here's the logic board image from the teardown.

I did as "LikeARabbit " suggested above, and it worked for me.

I was having an issue of a very dim to complete shutdown of my Apple LED Cinema Display 27".

I opened the cinema display as per the instruction from the "Apple Thunderbolt Display Teardown".

The inside are almost the same as I have both and can attest to this.

I tested the power on the logic board that "LikeARabbit" suggested and mine was running a consistent 24.3 V on my digital multimeter. As to where to test this, please see attached photos. sorry for the bad quality photos, but I had very little time.

Since my power was within in range I made sure all the cable were seated properly by unplugging and replugging them one at a time. Do this with the power cord unplugged so you do not fry the boards, LCD, or yourself.

One plug I noticed right away was the "Function" plug which was very loose. I believe this is the LCD background lighting system as it istantly increased my brightness after reseating this cable.

After powering the LCD up, I moved this one cable around a bit, and sure enough, it was the one causing my issues. It is now properly seated and I have not had any problems as before. The LCD is working as it did when new.

I did create new monitor profile after this as I noticed the colors were off at this point. I am a photographer and need these LCD to match. with my iMac 27.

Below are the photos of the cable that was loose inside my Apple LED Cinema Display 27 and the two connections where I tested my power to the LCD backlight system. 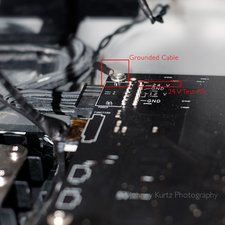 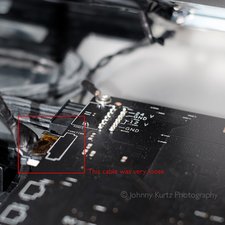 I had the same problems. Backlight was gone or very low. The short story: I found out that the micro controller does not send the PWM signal to the LED driver. Very mysterious! I checked the LED driver components (Mosfett, diode), I read the data sheet to understand the function of the HV9982 (LED driver). In the end there was no hardware problem there. If I connected the computer the micro controller enabled the LED driver but "forget" so send the PWM signal, so the LEDs stayed off. Mmmm...maybe this is a software error or Apple wants to tell me to buy a new one? So I bridged the PWM input pins with a little wire connected to a 3.3 V pad (which I found about 1 cm around). Nice that die PWM output pins of the micro controller were bridged by 0 ohm resistors, so I could remove same and cut the connection from the micro controller. And then I got full backlight again. Of course I am not able to dim the backlight anymore.

Hi Michael, you have any pictures of how you did it, or can you guide me through it?

Michael posted a LOT of detail in another thread here: What components need replacing on the Logic board?

Hi, I had a similar issue however I think thar @likearabbit is correct, I displantled an old iMac 27 which had GPU gone and, I noticed that they share almost the same display. I had to swap the small card on top of the dispaly ( where Video and Function cable is attached, reverse the LED cables from left to right and swap the metal frame. It worked perfectly.

Does someone know where the 3.3 v pad is on the Thunderbolt Display Board ?

Which pads i have to bridge ?

I have a black screen on my thunderbolt Display after Firmware update.

On my side I've changed the logic board and no result. The power supply shows 23.9V when light is on and 24.9V when off. Do you think it can be the power supply ?

Or this issue, backlight out, can be caused by the all-in-one cable ? Possible ?

I'm in the same situation. Not sure whether to get the cable or the power supply!

There is a step-by-step troubleshooting guide in the Apple Technician Guide, see page 17.

Hi Michael, can we have any pictures of what you've done ?

I think 80% of the internet won't fully understand what you are talking about (including me) and reproduce it ;)

See What components need replacing on the Logic board?

I have even a stranger issue. I noticed the low light on my monitor so I decide to take of the front glass and realize the problem was gone... it's bright as new.... only issue is when i put back on the front glass it gets dimmed again....

magnet issues? can someone answer this....

That is very strange, did you ever figure this out?

Hey, I solve this problem. My solution was remove the glass and take off the black tape of the ambiental light sensor and put the glass again.

I had this very same issue happen to me.

Here is what fixed it for me. Unplug the power cable from the back of the display, wait a few seconds, then plug it back in.

It has been working fine now for about 4 days so far.

Hope this helps someone else.

Bad news. Soon after this post the display no longer lights up. It works. The camera works. Just no display. :-(

@yabdab I'm experiencing the same issue, what it was?

Took it to Apple Store to get fixed, but they were unable to figure out the issue. Now it is a pretty paper weight :(

“johnny “ & “LikeARabbit” you’re absolute F*ckin’ legends! Thanks to you I saved at least 250€. Fixed my issue by inverting the LED cable and blowing hot air on the components around the connector.

Backlight LED strips need to be replaced, ether the LEDs are bad or the connector of the strips is bad because of the heat over the years…

I did replace the LED strips in the panel, which was a freakin 4 hour surgery, but the problem is still there (dim or no backlight, flickering)... before that I tried to swap the power supply, didn’t help either. So last thing that could be the problem at least in my case, are the logic board and/or cables and connectors I guess... this is horrible... :(

I had this same problem and managed to fix it by frankenstein adding inverter from iMac 27 and routing 12v LCD Power on signal to enable backlight for screen. 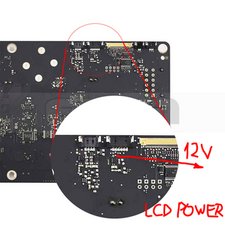 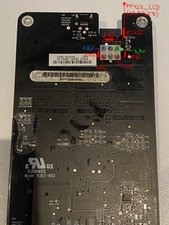 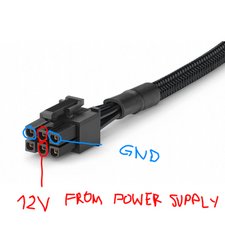 Thanks for the great instructions and ideas. I was able to resurrect my 24” LED Cinema Display which was showing a no-backlight picture by opening up the display and reseating the LED driver cable connection to the logic board. This has been sitting in a recycle / donate corner for a year, and thankfully I discovered this thread and bothered because it’s big and bright and beautiful again!