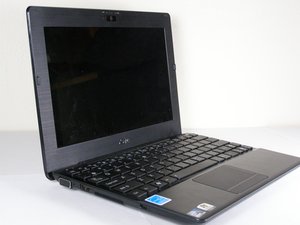 Monitor cable fried, how do I tell if anything else needs replacing?

Background: I received this Netbook second hand and it has had a short in the monitor cable for the entire time that I have owned it (about a year and a half now). It has been annoying, but has not actually interfered with my use of the device.

What happened: Just today, after having spent most of the day using it plugged in, I went to use it without the cord and it wouldn't turn back on. I tried once or twice without it being plugged in and nothing. I then tried plugging it in thinking the battery may have gone bad. It started to turn on, then there was a small puff of smoke accompanied by the smell of burning and it shut back off and remained off.

More info: I have opened up the case and it is quite obvious where the burn happened: where the short in the cable occurred the casing has worn away and the wires in the monitor cable made contact with part of the metal hinge in the case. There is no other visible damage to any of the other components.

My questions are as follows:

How do I tell if there is anything else that was damaged when the cable fried?

Do I need to replace the entire motherboard, or would replacing the monitor cable be enough?

Is it possible to replace just the cable without replacing the whole board?

Here is an image of the damage that I can see: 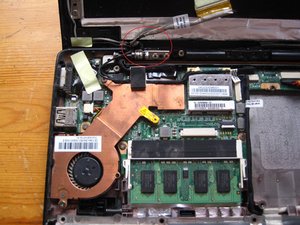 Post an image of your damage with your question. Include the cable as well as the board and connector. Use this guide Ajout d'images à une réponse existante to add images.

If it's shortened out like that it's more than likely a write off. It may have have taken the motherboard out. At the price they cost it's not worth getting repaired. Best advice is remove the hard drive (you can recover the data by plugging it into a working pc with an IDE or SATA cable and the correct power cable (found on the power supply) and copy the information off of it onto a USB stick to move to the new laptop of keep on the pc.

The net books only really have a years lifespan because of the component quality so I'd suggest in investing in an acer or a samsung (13") you can pick a reasonable spec up brand new for about £300 and if you wait until January you'll be able to pick them up even cheaper as clearance.

Yeah, I figured that might be the case. I may get a new motherboard and monitor cable anyway; try repairing it just for fun, but thank you for the recommendations for a replacement, I'll definitely keep those in mind.

In case anyone runs across this and is curious: I did get a replacement monitor cable and swapped out the burned one (just to see what would happen), turns out everything else was fine, still up and running to this day.