Poor wifi signal - not "greyed out"

I looked everywhere for any answer, but didn't find any solution. My iPhone 4S gets very poor wifi reception. I'm able to connect to my router only when I'm literally next to it.

The phone is not new, and the screen was most probably changed - some screws were missing.

Anyway, which parts (even tiny) and screws are anyhow related to to wifi signal strength? Which part/s of the phone work as a wifi antenna? What else can I try to do to fix it?

Thanks for any advice.

Tighten this screw if loose will weaken wifi 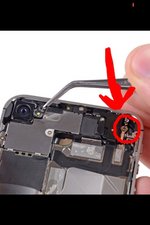 This probably wont help - I replaced the wifi flex with a new one and tighten it really well. I will try to clean it with alcohol.

The first cable you replaced was the wifi part the second located on the speaker is not is a cellular antenna as an experiment on my own 4s I removed the cable completely and wifi was still at full strenth so the lower antenna does not affect wifi..

well give the sheild a shot and replace it but dont have high hopes as it wouldnt cause weak wifi.

have a 4s at home here and have removed that part and wifi is still at full strength .

well give the shield a shot and replace it but don't have high hopes as it wouldn't cause weak WiFi.

have a 4s at home here and have removed that part and wifi is still at full strength .

I give up. Replacing of the EMI shield didn't help either. Probably last thing I can do is disassembling the whole thing, cleaning it with alcohol and reassembling using new screws. :)

I don't think it will make a difference if you have the sticker or not but I couldn't say that for sure.

The only other thing I can suggest if you have tried everything else is to see if you have tightened the screw as in the first suggestion and to replace the wifi emi shield.

I messed about with my iPhone yesterday with the bottom speaker part to see if it had any effect on the wifi and it would appear that it is actually just related to the antenna and not the wifi as I first suggested. This is really weird as this fix has always worked for me in the past but I guess I must have just been lucky.

If it still doesn't work then it may be that there is a fault with the wifi chip or you may have a blown capacitor?

I've also heard that if you clear the cache, cookies etc on the phone (under settings) then this sometimes helps but I've not tried that myself so don't know if this will make a difference or not.

Anyway, at this point it would be a good idea to change the wifi emi shield to see if that helps (I've included a photo for you so you know which part it is). If it still doesn't work after that then I would say that the board has a fault. 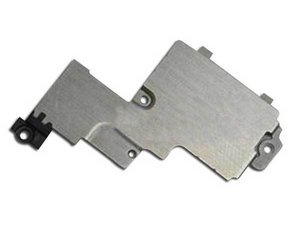 This good tutorial "How to Fix the iPhone 4S Wifi Problems After iOS 7 Update" may help you http://www.etradesupply.com/blog/how-to-...

"I do know which parts are wifi related as it's the parts that I told you about already (I fix iPhones for a living so I know what I'm talking about)."

Clems you do realise the first picture that you posted is of an iPhone 4 battery connector not the 4s don't you?

The pictures are from the iFixit 4S teardown so if anything is wrong with them it's not down to me. Also, as I said after my comment, the actual part I have shown in the 1st picture doesn't relate to the wifi issue as I originally suggested (I was getting confused with another topic - that will teach me to try to answer 2 questions at once!). :)

Hi Eddie, I replaced 3 iPhone 4s screens , and I noticed that on the inner ( right) screw of the EMI SHIELD and its base came loose ( we are talking about the very little screw on the EMI SHIELD that is over the screen flex connectors . I couldn't "glue" the base for the screw so I took it away. Since then very poor wifi signal , unless I am in the same room of the router.

Check to see if you accidentally pryed up the soldered connection, these are the usual symptoms. you can actually press it back into place without resoldering and wifi will work ONLY when you're next to the router,

you fixed the wifi problem?

Unfortunotely not. I think i tried everything except for changing the wifi IC. Then I decided to move on and buy a new phone. :)