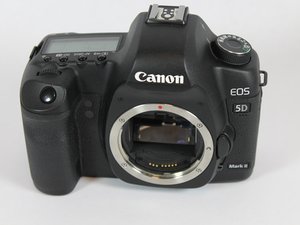 Replacing the motherboard and need some instructions.

I don't know what I'm doing but I took apart my Canon 5d after it's been acting wonky and it looks like one of the little black things on the motherboard is corroded. I found a motherboard for $190 but no instructions anywhere on how to replace it. I was also told that Canon may have to "set up" the motherboard after I change it out but I don't know what that means. Can anyone enlighten me?

The way it acts wonky is after I've used it for a while, the select button won't work or only works when I move it in certain directions and the auto exposure lock will come on randomly and won't turn off on its own or when I take the battery out. And I've already done a hard reset.