I’m having a screen/display issue which occurs immediately when my iMac is powered on.

Immediately after the Chime sound, this screen 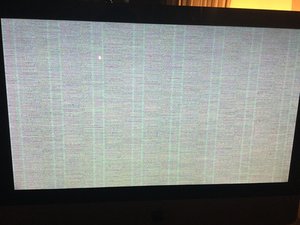 is shown, after 10 seconds shown with an Apple logo, 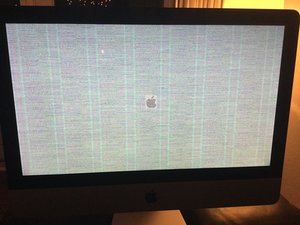 and within one minute followed by this one: 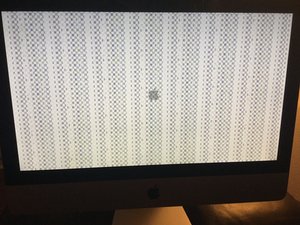 And there seems to be no activity after a minute. I cannot login, but the iMac is accessible from the network. The login screen does not seem to appear.

I however can boot into the recovery mode and then see the "proper" screen, but with distorting vertical lines on it. 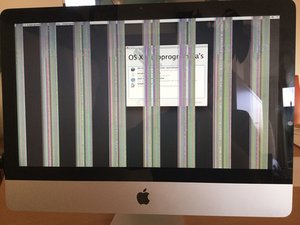 I attached an external monitor which also presents the vertical lines, so it is a Video card issue, not a display issue.

The problem first occurred some months ago and was diagnosed to be a Video card or maybe a logic board defect. I teared down my iMac and sent the PCB’s to a repair service in China, but got the message the boards were functioning fine and got video proof of that.

The repair service sent the board back to me two weeks ago, and after reassembly of my mac, they seem to be right, the iMac worked like a charm without display problems.

This seemed to be a good moment to upgrade my iMac with an SSD, and last weekend I opened it up again, removed the display and replaced the DVD with the SSD, and put the LCD back into the system again. And guess what, the screen issue as displayed on the attached pictures occurred again. I reconnected the display (data) connectors about 5 times, but the problem remains.

So, the GPU card worked at the repair service and I have also seen it working after reassembling the iMac, but on this moment the primary problem occurs again. I’m having the idea all electronic parts are functioning properly and it’s some kind of connector issue.

Could it be the video card connector (to the logic board) that is causing this problem? In another thread I found it could possibly be corrosion on the connector. I already removed the video card and cleaned the connection using Kontakt 60 contact spray, but that did not help.

Has anyone seen this problem before? Any suggestions are welcome.

I don't want to replace the video card as it will cost me $300 or more. I'm looking for a way to fix it.

Anyone has experience with refreshing the solder by baking the video card in an oven? I see different threads on forums presenting this as a possible solution.

I managed to solve the displaying issue. As it seemed to be a video card issue, and the connector did not seem to be the problem, I finally tried the process of re-flowing the solder of the video card by baking the video card in the oven. Yes! The card is repaired by puting it in the oven for 8 minutes at 190 degrees celsius, after removing all stuff from it that can melt (thermal paste, rubber). It is described on many forums on the internet and also here:

After assembling the iMac, the screen is functioning great again.

I hope that someone will be helped by this thread. But beware: It is at your own risk

I tried "baking" my card in the machine. My iMac would stay on (gray screen) in safe boot mode, so it would heat up on it's own. I turned it on and laid it flat on the screen for about 20 mins, hoping the internal heat would help reseat the graphics chip.

Really I was just hoping for it to work for a few minutes while we grabbed some much needed files.

After a few attempts, the iMac is up and running. It's been on all night syncing files to the cloud. I'm sure this is a temp solution, but might be worth a try if you're not prepared to take everything apart.

I also used this method @cshafferwhite. It worked and my machine has been working fine for over a week now.

See Dan's answer on this issue: Is there a Video Card Replacement for my iMac?

I had the same issue vertical lines but one day l left the iMac 2009 24" in the car on a very hot day and it was to hot to carry without an rag.

When l got it in the house it started up fine it was fixed, seems cooking it in the car fixed it for a week. But the lines came back ??

I had the same stripy pixelated thing on a fixer upper. Also suspected the logic board or graphic card. But I was wrong: When I booted it holding D to do the hard ware test, my monitor was showing no lines. I aborted the test, and booted from another external HDD, and it came up without the pixelated stripes. So I used that boot up to erase the build in HDD, which by the way had been maxed out, restored that HDD with a fresh OSX, and voila....no more stripes. My conclusion: Always fix the most likely component to fail: the HDD.

@imacpain1 rich, I would say that the fix I found is still working: I did send in the GPU and had it repaired in California, by http://stores.ebay.ca/brickfence.

Not just a reflow, but had a new chip installed on the GPU, came to about US$ 140.

Update: The restored HDD did NOT fix this in the long run. Back to replacing the video controller. Is that integrated on the logic board, or is it separate, does anyone know?

The more luxury model comes with a 1 TB HDD and a ATI Radeon HD 4670 graphics processor.

This item about "baking your videocard" is about the luxury model where the video card can be removed from the computer completely. After removing much screws and cables, a logic board of approx. 8 x 8 cm remains in that case. That is the video graphics card I put into the oven.

Hi YpeH, thank you for the heads up. I just removed the ATI card yesterday and I will be shipping it to a repair service in California, who will do a proper job including "reballing" (whatever that means...) for $100.

I did send in the GPU and had it repaired in California, by http://stores.ebay.ca/brickfence.

Not just a reflow, but had a new chip installed on the GPU, came to about US$ 140.

After that I needed to replace the HDD as well. Since this model is very touchy about what HDD it wants, I needed to order a conversion kit for about US$40, so it now allows any old HDD, including even 2.5" SSD. This concludes my fix, she is up and running smartly now, for hopefully another decade. 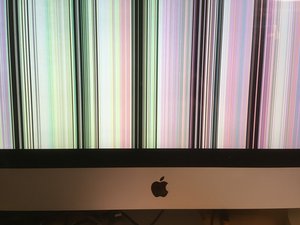 im having this vertical line issue having attempted swapping my optical drive for ssd. Put it all back together and the screen looks like this all over! Not a hint of partial image or anything. Any ideas please folks?