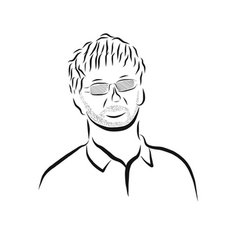 Display connectors ever so slightly damaged - cause of broken display?

Bought a damaged iPhone off of someone who *claimed* to of dropped it and the screen to stop working.

I took the iPhone apart to find the battery all wrinkled up as if it's been soaked in water and it was very flimsy to the point where I would be been able to snap it in half effortlessly. I replaced the battery, and now this part is working. I identified this by plugging the iPhone into my Mac which opened up iTunes and Photos.

So my Mac can see the iPhone perfectly fine, comes up in Photos displaying the photos on the iPhone, but there aren't any to display anyway. Comes up in iTunes asking if I want to allow this computer to access information on this IPhone. I select continue and it prompts me to accept on the iPhone screen, obviously the screen isn't working so I can't get any further at this point.

I tried the screen it came with, with the new battery but no luck. I don't currently have a replacement screen to try, but I did have a look at the connectors under a magnifying glass on the existing display assembly (bar the camera, sensor and home button). I noticed the odd one or two damaged pins; perhaps more couldn't tell for sure with this strength of magnification. Now, working in PC repair where things are bigger and less delicate, such little damage to the connectors makes me think it's not that. But my question is how damaged do they need to be to cause the screen to not function?

It should also be noted that a few brackets and almost all screws are missing, so components like the lighting connector, speaker and headphone jack are all loose. Although because I can get the iPhone to,come up in iTunes I don't think it matters too much. 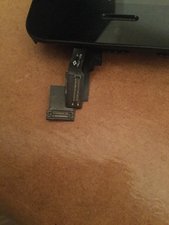 Shall I just try a new screen?

post an image of what your connector pins look like. Yes, it is easily possible that those are the root cause of your trouble.

Just uploaded in question. I only managed to notice under a magnifying glass, although I hAve just noticed another in the ribbon cable seen on bottom left.

Thanks for your help.

August Williams sure looks like your LCD connector has some bend pins (blue arrows) Take a close look at the connectors on the logic board and see what they look like. Right now, I am very tempted to say that those are your issue. If the connectors on the logic board are okay, consider a new display assembly. Be mindful of the digitizer connector since it also has a tendency of bending the pins since it does not have any end caps. 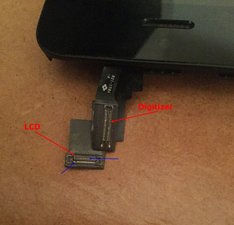 This is the digitizer connector after a few failed proper alignments during replacement. One reason to be mindful during the repair

As you can see the connector lacks metal ends and this is what makes it a weak connector. It is easily possible to damage the connector by mis-aligning the digitizer connector 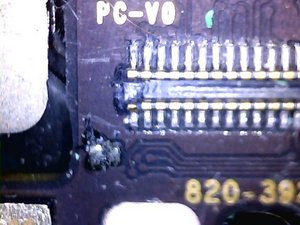 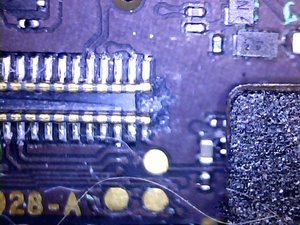 Thanks for that! I'll try a replacement screen and see what happens. I appreciate your help a lot.

They only need to be slightly damaged. Service guides recommend to be very very careful with the unshielded connectors as they are all required to operate. Damaging one could be enough to make it act up.

I see. Judging by the not so great picture I took I can see there is one slightly damaged. I guess it's that. When I've had just the odd one or two slightly damaged in laptops, it never mattered too much. Thanks for your help! I'll see what oldturkey has to say too.

What model iPhone is it?