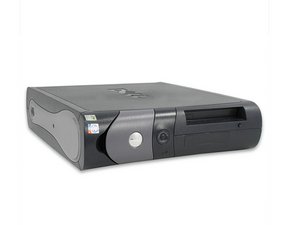 The CPU fan goes noticeably faster than it should!

Basically I have an old Dell GX280 full-size desktop computer (it's not the one in the picture on this site. It's one which is made to sit up and not lay on it's side), and recently I had bought a replacement motherboard for it since the old one's capacitors were bulged and it wouldn't boot, and the fan would go extremely fast. After installing the new motherboard, I noticed the computer CPU fan is going rather fast, and lots of air is being pushed out, and this is when it's idle and not doing much of anything. I don't have a hard drive in it right now, but I boot Lubuntu 16.04 from a live USB to use it. I've looked high and low on the internet for an answer, yet just about every person describes their problem as being "Extremely fast and loud fan, and no boot". Mine boots, but goes faster than it should. Any ideas? Oh, and this isn't my main computer. It's just a spare which I'd like to make use of.

Hmm... your question somewhat peaked my curiosity so I was doing a little googling about the problem your having & came across a informative little article written regarding the exact same issues your experiencing with your Dell OptiPlex GX280.... I don't know if you came across it during your search for answers so i figured id share it with you!

And here's a link to a response posted in Dell's community support forums regarding the same thing... http://dell.to/2gzwoaa

After reading those, I honestly would just toss it in the scrap heap if I were you seeing as its not your "main" computer ;-)

Thing is, the machine works, but the fan goes rather fast, and mine boots fine. The ones you mentioned don't boot at all. I had even mentioned it in my first post:

" I've looked high and low on the internet for an answer, yet just about every person describes their problem as being "Extremely fast and loud fan, and no boot". Mine boots, but goes faster than it should. "

Have you tried going in the BIOS settings and check if there is a "system fan" speed setting or something similar that could be adjusted maybe?

1. Try clearing CMOS using the 'Clear CMOS' jumper on the mainboard (You should see writing above the jumper block saying something like 'CLR_CMOS'

3. Try and swap the chassis fan & CPU fan connectors around.

5. If all this fails, you may have a faulty thermal sensor on the replacement board.

If this answer was helpful in fixing your problem let me know by sending me a email to ranlove@yahoo.com