Are the small threaded holes on the logic board serving any function?

Do the small threaded holes on the logic board that are used to secure the protective plates that go over all of the electrical connections have any other fuction other than to hold the plates down? Is there going to be a problem if one becomes disconnected from the logic board, say the inside corner of the board for example. I have one that fell off during reassembly and I want to verify that this is not going to be a problem. How can you fix this?

well I tried to reattatch the jumper to only fail, I cleaned every single piece with isoprop, and tried again to only have it fail, took it to apple and they told me that they can't take off the back because they don't know how to work on iphone 4. I am just trading in for the stiff price of 199.99 for a new phone... I loose this time

Sorry to hear that and I do wish you better luck in the future.

same has happened to me, many times and the same one you are referencing (1.2? or 1.4mm screw on the inside corner of the logic board, under the "U" shape on the metal frame. Try finding that thread in carpet. Anyways, I have been successful every time carefully putting it back exactly where it needs to be, then hitting it with the solder iron (dont take that literally) and remelting the existing solder, getting it to hold. Be careful, because there is a connector right there for the screen and you dont want to bridge the connections. I know may have already taken the phone back, but this is for future reference for all you googlers ;)

,YES...because they are used as jumpers...

So I mannaged to get the jumper back in place sould I try to attach it in any way?

Joseph Razmek, if you got the jumpers back in place, attach it and see what happens. Until you actually try it out you are just guessing. See what happens and let us know.

i have the exact same problem, i detached the screw hole from another logic board, reattached it but i had no success. The iphone still has no sound on calls. Is there any specific way the solder has to be applied in order to work? Any ideas would be really helpful. Thanks

it should have enough solder there, on the thread and the board. Just get it exactly into place, hold the solder iron on it for a few seconds, repeat if it doesn't hold the first time. I think I'm going to update the manual, this can be avoided if you don't put a lot of pressure on it when unscrewing (if its the same screw I'm thinking it is)

I too had the problem, that the thread (tutorial ' Display Assembly ', Step 13, yellow screw) separated from the logic board. Actually I think it was broken off when I opend the phone (crshed display due to droping). You can see this here: position and removed screw and thread: 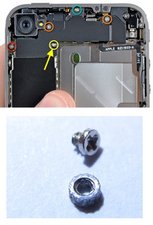 I decided to assemble the phone without this screw and thread. Up to now I did not have any abnormalities (well, I had the proximity sensor not working problem, but I think this is not related).

As an electrical engineer I consider it at least as very uncommon to use a shield or antenna as a conductor at the same time. Reasons against are: 1) bad testability of the board while not integrated into handy 2) the use of a screw is not as reliable as a soldered connection. But of course there remains a chance they do it anyhow, as space is really crucial inside such a device!

If the shield really has a jumper function at the same time: What kind of malfunction have you found in devices without this screw?