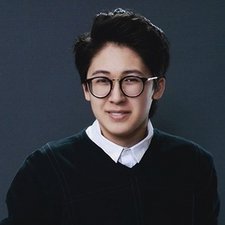 I have no sound in Chrome.

The sound on my computer works. The sound on other browsers work as well. The only place the sound does not work is Chrome. This has happened once before but I was able to resolve it. This time, nothing seems to be working.

List of things I have already tried (in no particular order):

The only thing that has been suggested to me that I have not yet tried is using Chrome Beta and Chrome Canary. I will eventually try them if nothing better can be suggested to me. I would prefer them to be a last resort though, as I do not want to risk any bugs.

Finally figured it out! In case anyone else has/had a similar problem, this is what I did.

2. Un-check "Allow applications to take exclusive control of this device"

Thanks very much ..it worked for me

THANK YOU! It worked for me :D

always great to see users explaining it instead of saying something like "figured it out" as that helps no users who may have the same problem. good job!

This solution did not work for me, Windows 7 Pro

It is possible Chrome was deactivated at your Windows Sound-Manager.

Go to the task bar (mostly at the right side of the bottom), right click on the Sound-Icon, open the the option "Volume Mixer" and check if Chrome is muted there.

No, that is not the case. Thank you for the suggestion though.

Chrome actually doen't show up in my Volume Mixer. Is that normal?

Mh I think not, mine is listed in there.

So do you think that could possibly be why the sound isn't working?

if you had a secondary or tertiary computer screen that played audio , and you made it so that sound comes through that screen, then you either do not have that screen anymore or something shifted around in the updates. go to “App volume and device preferences” and make sure all of your chrome is set to screen you want, and not trying to play out of a device that is no longer hooked up to the computer slash shifted back to default with the last update.

my problem was that, if i opened chrome on a page with sound, it would play fine, but if i went to another page or reloaded that page, the sound would stop playing. All other sound worked fine in all other browsers and the computer itself. only when i went from one tab to another with sound, or loaded a page with sound that the browder didn’t open on, or went to another page, then the sound would not play anymore, and i didn’t understand the problem. i’ve tried everything from clearing cookies caches, updating drivers, looking through chrome settings and a bunch of other junk that DID NOT WORK. if you have this same problem. this has been going on since february… when i moved and broke the adaptor to my old tv as a secondary screen. didn’t know this was the problem until now.

App volume and device preferences, then look through the apps that actively use sound (system sounds should be there for reference). Chrome appears and disappears in this list when it’s open and when sound is playing, so if it’s not there, go to a page you know will have sound (system sounds should be there for reference) then app vol + device pref, and switch the Output selection to whatever screen or audio device for whichever screen/speakers you want the sound to come from, and that SHOULD fix it.

no guarantees. but this is what fixed mine. and i know i got it because the sound, that hadn’t been playing before, suddenly started playing fine the moment the audio for output was shifted to my default speakers.

again, i stress, this is what worked for me. 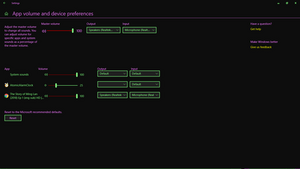 Searched for so long for this. This is what worked!

Though a very specific problem, this has been the only answer to truly help me out. I had never thought to be using the app volume and device preferences, considering I was using the Sound Blaster Z control panel and EarTrumpet.

Thanks for not posting another lol just unmute Chrome answer and actually providing a detailed answer with a profound sollution, along with a useful screenshot. You're a life saver!

Thank you so much

I searched and searched. FINALLY I found this and it was the resolution. Thank you

I finally got mine working!! Here is what I did....

go to the Chrome "settings" in the 3 dot drop down, scroll down and click "advanced", under "Privacy and Security" click on "Content settings", scroll down to "Sound"........mine said "mute sites that play sound", I clicked on the arrow and clicked the on/off slide button and it changed to "allow sites to play sound" it also said (recommended)......and, apparently you can add sites that are "allowed" or "muted"

Hope it works for anyone else!!

I should add that I closed Chrome and then reopened it to be sure the new settings took .....

Thank you! This is exactly what I needed!

Finally Norm saves the day! Thanks

thank you! my chrome decided youtube should stop making noise.

It worked . I'm left wondering what the !&&* did I do to make this happen.

Finally, I found a solution for Audio in chrome not working in Windows 10

This should work now.

You can view the screenshots here...

I had the same problem with no sound from Chrome. Didn't appear in the volume mixer. Wasn't muted. The thing that worked for me was turning off hardware acceleration whatever that is.

Click on the 3 vertical dots in the top left of the screen.

Turn off the toggle switch for "Use hardware acceleration where available"

my sound is not going through my headphones

Another solution if you are on win 10. open volume mixer, then open the tab that dosent have sound, it will probably show up on the mixer, and it should be on min level. Once its like that, adjust it to max then its okay now.

I hope this helps to those who still has this unsolved

This is what fixed it for me - thanks!

it works <3 Thanks to @iam.eronordiz

open volume mixer, then open the tab that dosent have sound, it will probably show up on the mixer, and it should be on min level. Once its like that, adjust it to max then its okay now.

Sound Mixer sometimes has a horizontal scroll bar at the bottom, make sure you scroll to chrome and raise the volume or unmute if necessary

Windows 10 , Google Chrome, CNN Video sound returned after I checked Spatial Sound on. Even thou I do not use headphones!

How do you get to Spatial Sound option? Wondering if it's there on Win 8.

Bahamas Beaches, your suggestion worked! I believe Spatial Sound was a new feature I got in Windows 10 after an update last night. And it was off by default. Usual Microsoft dumbness.

I found the answer when I had the problem myself, chrome was set to 0 in the sound mixer. I noticed when I changed outputs it started working.

Thank you! It helped me alot.

Thanks @almodaffar didn't even realize I muted it a while back and forgot. I tried a bunch of other things, including updating flash, turning off all Extensions to no avail until I read your solution. One of those head-slappers.

I didn't even know you could unmute a tab. That fixed it!

This suggestion is unbelievably simple but took several hours to find it! Who knew? Almodaffar solved it: Right click on an open chrome tab then select unmute site

yep, click on the lock symbol left of the address bar and unlock mute...worked for me

Right click on the tab, select "Unmute Site". then click the Muted Speaker if it shows up on the uTube site or whatever you are trying to watch/listen to.

reset chrome settings, worked for me

go down to advanced sound options

make sure chrome open on a music channel

change out put to: default

open chrome://flags and edit this to disabled

We were having a quirky sound problem in Chrome. Ads would play at regular volume, then the content would barely be perceptible with headphones (though fine on laptop speakers).

Not sure why that worked, but it did.

For Discord users, this is possibly the reason why you cant hear anything from your Chrome browser videos.

this solution completely worked for me, as discord automatically muted Chrome after I messed with some mic and audio settings. Took me a bit of troubleshooting to figure it out, its actually a feature which enables discord to reduce or completely mute the sound from other apps while you or someone else is talking. If you change the settings of discord before you got the audio problem on Chrome, you know why now.

Thank you for this topic, saved me a lot of time!

Basically go to Sound Settings —> Manage Output —> then disable all other than the headset, speaker, audio device you use.

I have the same problem with Googles’ Chrome sound issue or lack thereof.

It's strange but I recently added a HP Chromebook x360 (over priced) to my personal network that sync's my devices: Android Chrome OS and Google and Windows PC and Toshiba Laptop and a Samsung Tab 3 8in 2 smart phones and don't forget the smart TVs' and there connection to “Nest Mini” you got for free from ahhhhh oh Google. That's a lot of Sync-n going on.

My point is all these unnecessary things all connected into one Google account you can expect a little glitch now and then. They are still speaking different languages but getting better trying to make every device you may own work seamlessly together. Windows PC sync-ing with Android phones was unheard of. Maybe it's still is.

Many good choices in the mean time if you need sound?

My point is until Google, Android, Apple and Microsoft and on and on get it together (it's Googles bad on this.) Edge or Firefox or any one of the hundreds of search engine and browsers come to an agreement in their settings if I want to hear the sound.

Googles’ Chrome is great for reading until …

Type in sound mixer options in your search bar, click the result, then put everything back to default. That’s what worked for me.