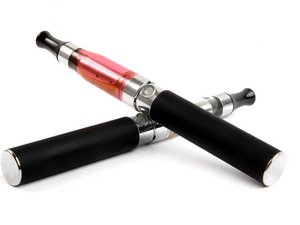 I recently dropped my smok mag 225 and busted the glass on the tank... After replacing the glass i screwed the tank back on and it asked me new coil or old coil... I selected old coil and the ohms read 41...but when i pulled the trigger to hit it the screen said atomizer short... I put a new coil in and same thing... It reads the ohms of the coil but now says no atomizer... What is the problem? Thanx for reading....

I havent taken it all the way apart yet... Im scared i wont b able to put it back together again... But the top part looks fine...

My girl and i each got one my glass also broke but i had no problem with the replacement glass. On hers tho t the screw kept falling out for theclip release and now she's lost it completely.does anybody know where to get replacement parts for it? Thanks in advance to anyone who can help.. Looked everywhere i could think of

Another thing that happened to mine is the press fit 510 terminal was spinning slightly, and when rotated too far was giving a short message. easy fix, pull the top off (5 screws), grab some pliers and press the top ring and retaining ring (the one that sandwiches the ring terminal) together. It tightened up the 510 fitting in the top and the wire terminal to the fitting and fixed the issue.

I have this problem @rickgrewal it only spins very slightly about 30 degrees clockwise and the same anti clockwise.. however i have tried this method and it's still spinning.. are you able to upload a video of how you fixed it?

Ok, same problem with my mag, I got the top off and can see the wire needs soldered back to the 510 connection, but I cannot get the mag body to split in half so I have easy access to the wire. All screws except the battery release screw are out, I cannot get the battery release screw to turn either direction, but that's probably what's holding me up. Can anyone help me with splitting the mag body?

I don't know if u have tried this yet but I know with the smok products the connections can be touchy. So if you unscrew the mod make sure your connections are clean and check if the pin inside the mod still springs up it should push up against the tank

This just happened to me, so I took the top part off and the cord that connects the batteries to the atomizer was snapped in half (looks like it was put together wrong) maybe that is your problem.

So how do we get the mag body to split? I cannot get the battery release screw to move either direction.

That screw and only that screw has Lok-Tite on it otherwise known as liquid anchor, basically like a type of glue for screws and bolts that is used for parts that vibrate often, or really if you really don’t want it to come out. Just give it a hard twist (counter-clockwise) of course, and it should come right out.

Other than that I would say take that one out first to make sure there isn’t any pressure on it making it stick.

I dropped my mag it’s reading no atomize. How can I fix it?

Its the saudering you have take it apart and reader the white back in place that only $@$*!& part of smok they never use enough

@ Jacob benson go to the bottom of my post and read that part for a quick answer.

Great topic. This is just what I needed to know! I dropped mine and it happened to fall right dead straight on the top of the atomizer and I happened to have an old mod, the tank worked still in-fact still works to this day, anyways the mag itself wouldn’t read any tank I put on it. It would read no atomizer for a while then after pulling it out months later it started reading random oHm’s like 3.4* 5.2* 1.6* all on the same atomizer. I took the thing apart just now after about a year of it being retired and the sotter (sorry my spelling is poor) is still intact from what it looks like. There seemed to be a little bit of corrosion around the top piece but I’m sure that’s just age it wasn’t bad. The only fix I could think of is trying to mess with the pin, and if that doesn’t work take the whole thing apart to re-sotter the wires.

P.S. the screw on the battery release button does come off like any other screw counter clockwise. However when I took mine out it had Lock-Tite ;also known as liquid anchor; on it (the blue or red stuff that you put on screws so they don’t come out with vibration or usage.

I also dropped my smoke may an broke the glass so I got a new atomiser, it reads no atomized when connected so I tried it on my other smoke an it said the same whereas my other atomized is fine on both…. Seems like it's the atomized not the smoke that the problem lies with. Anybody got a fix for this please. Thank you so much in anticipation of a resolve.

been through that.. just star at a low wattage. soon it will recognize ur coil resistance.. it happened when i clean my atomizer then after reinstalling it i suddenly hot “ new" instead of the old resistance reading.. after lowering the wattage i start increasing it.

So Ive been having a problem with my mine. the trigger wont fire? It doesnt seem stuck. I cant get a full pull off of it but for 2 secs. After pushing/holding down on it this way and that. Please Help!

Hey, my Smok Mag is displaying 77.0°F when I hold the trigger in TC mode. Still vapes just fine, no burning of the liquid. I can't find anything online anywhere about this problem. Even after changing the cells, disconnecting and reconnecting the atomizer, the problem persists.

The same thing happened to me and when i shook it it made a sound and i took it apart a little chio in it that reads R60 1736 fell out it was glued on. I sent in for a replacement and they said i had to pay for it so now im just looking for electrical glue east fix

Hi thanx but which bit did you shake an take apart, Battery pack or Atomiser please?