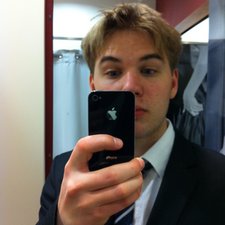 Switched to chinese LCD, ruined something

I switched to a chinese LCD after I broke the original one. It didn't work so I put the original back in and even since then the phone behaved weirdly.

Everything else worked but it was slow. Mute vibrated a couple of seconds later than it should, sleep put the phone to sleep with an enormous delay and for the home button to work you had to hold it for a while.

I took it apart and checked the connections + pins which seemed alright. Then I turned it back on, it was all the same. As I couldn't make out anything from the screen, I switched the mute on to see if it had already booted. It suddenly started to vibrate and wouldn't stop and the screen started to color black from the left top corner to the right, adding lines. It looked like MSDOS booting up, only there was no text, just pixels. Then I got a white screen and the phone kept reseting every now an then, varying from every 20s to 2mins.

Screen after checking the connectors

Screen after checking the connectors

Then the battery went off so I plugged it into a pc but no success. Now the display stays off, nor does it glow, not even the digitizer works. I did all the possible resets I found online, nothing fixed it. Itunes recognizes it, vibration motor works perfectly responsively, sound plays when I call it from another phone, even the home button works (it will hard reset when I hold the two buttons yet when I hold only the sleep button nothing happens)

I understand there are some chips burned in the motherboard, as I might have hotswapped the displays since I didn't know whether it was on or off.

What about the Display interface chip? Can I just switch it?

Could you give me advise how to go about it?

John please do not think about swapping any SMD components or IC's on your board until you have absolutely exhausted every other means.

Although I do have a chinese digitizer which came with the LCD. I took it all apart to make sure it's off, then I connected the digitizer and started up to see if I can guess-slide-to-unlock but didn't work either. I think my issue is most likely to be caused by a malfunction on the board.

generally it should just be the LCD to replace... you can see the dead pixels(black) on the mostly white screen, you have checked connections, you have reset/reseated. You have a backlight so I would replace the LCD. Also there is no point in replacing a chip which is very difficult if you don't know this will fix the problem... buy from a dealer who has good rep from ebay, check you have ordered the right part not 3gs

I opened it up, put it back together and now I don't even have the backlight.

I noticed that the white slot where ribbon #3 goes has a small piece missing, so I figure it's fairly possible I jammed the connector and that's why it stopped working. Taking a closer look at it, the connectors are on the bottom of the white piece thus it shouldn't matter... right?

The white part shouldn't be a problem... Do you have vibrate?

3 is earpiece/proximity... Not much to do with light. You sure you have charge? Plug in to iTunes or charger and light should come on again?

Nah.. done that a million times, tried a couple of hard resets.. nothing helped.

The backlight remains off nomatter what I do. Plugin, Hard reset, Restore via Itunes.. Vibration works fine.. You swith the mute on, it vibrates

and when you put the old screen back in is there any light? if there is then I would get a new lcd, if there isn't then the problem may be the connection itself (no 1) or unfortunately a part on the motherboard...

I have "hotswapped" displays before without too much drama, you may just have had a bad lcd..

So finally whats the solution to this? Is there any for iphone 3gs and iphone 3G?

I mistakenly swapped the lcd screens of 3G and 3GS and now got issues:

2) on iphone 3G no backlight no icons i see but phone works otherwise(recevies call, vibrates, recognized by itunes - but no display and touch sensing

on the 3g try taking out the logic board for an hour..seems to reset things. then reinstall the correct lcd. as for the 3gs try the old lcd and see if the backlight works... if it doesn't then you need to replace the 6r8 coil (most likely) you can get this done at a good phone repair shop. The lcd should still work...hopefully.

ON 3g I let my phone completely discharge(I didnt want to open everything) that resetted my phone and it works great now..