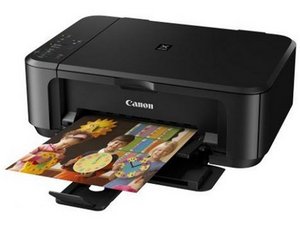 An all-in-one printer and scanner with duplex print and WiFi connection.

When I came to use the printer today it refused to pick up paper. On investigation it appears that there’s a displaced paper guide finger just behind the paper pick-up, maybe something to do with the duplex mechanism. It was working fine the last time I used it no more than a few days ago, so the only thing I can think of that could have caused it is that I might have unplugged it without switching it off though not, I’m fairly sure, while it was doing anything.

You can see the finger with the extended spring in the photo below, taken with the rear duplex mechanism cover open. Access is extremely difficult - I can only touch the finger with tweezers but not grip it or move it.

Has anyone seen this before, or knows what’s involved in disassembly? Nothing very helpful seems to pop up from an Internet search. 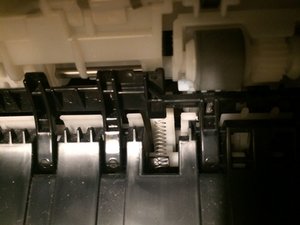 Update 13Feb: I took it apart this afternoon and found how to reset the finger. It’s driven by a spindle running the length of the guide (see below). The flat end of the spindle locates in a slot which is rotated by a series of gears. I rotated the spindle to withdraw the finger and aligned the slot to correspond. After a minimal reassembly I successfully copied a page. So I completed the reassembly and reinstalled it in its working position then tried a print, but it immediately jammed again in exactly the same way. So it may be a problem with the gears driving that spindle.

(I’ll write a disassembly guide from what I’ve learned as soon as I get the chance.) 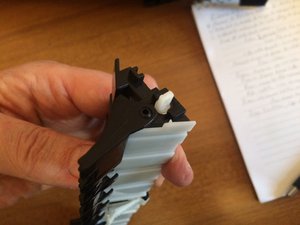 Thank you for sharing your findings! My printer shows the same symptoms as yours.

So far, I have successfully followed your dissassembly guide, and I have uncovered the mechanism that drives the finger that seems to block paper transport. I have moved the gears that I could reach with a spudger. I could not really make sense of them either.

Unfortunately, after reassembling the printer, the printer behaves just as before, and I have crumpled another sheet of paper. I am still undecided if I will disassemble the printer again, just as you did, hoping that it will fix the problem.

Thank you again for the excellent information! I would not have come this far myself, I am quite sure.

I disassembled it again to take a closer look at the mechanism that drives this finger. I turned a few of the gears by hand to see what happened but it’s impossible (for a person of my modest intellect) to see how it works. I tried powering it up with the control panel reconnected but the scanner still off in the hope of seeing the gears in action, but it flashed angry lights at me, and the status as seen by a connected computer said that something really bad had happened to my printer and I should take it to someone who could fix it. That’s me, so I put the scanner back, powered it up again and it was as docile as a lamb. So I tried a nozzle check. That worked, so I tried another. Still ok. I tried a head alignment and that worked too. Pushing my luck, I tried a single sheet duplex print, and it still hadn’t jammed up. So I put all the screws and panels back and reinstalled it where it lives, and we’ll see how it goes.

With luck, the problem might have been simply that the mechanism had got into an invalid state through pulling the plug without a soft power-off.

I wrote up the disassembly process as there aren’t many guides for printers.