Lately and for a few month, whenever I started my iMac, after a few minutes the fans would start blowing really loudly. We never took the time to know what was the cause of it. Unfortunately, a few days ago, when trying to plug the printer to our iMac, it shut down and we never have been able to turn it up ever since.

I’m writting down to know which piece is broken. After running a few tests, here are my assumptions :

2) I don’t think the motherboard (logic board) is the cause neither because i noticed some voltage as well.

I don’t know what more tests I should run in order to know which piece I should replace. 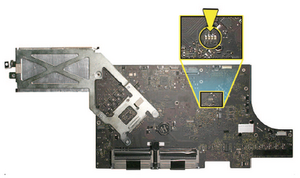 board that can help you to troubleshoot the computer. The LEDs are located above the speaker

connectors and slightly to the left. Refer to the next page for a close up graphic of the

• Indicates that the trickle voltage from power supply has been detected by main logic board.

This LED will turn ON when you connect the iMac to a working AC power source. The LED

will remain ON as long as the computer is ON or asleep.

• When computer has been correctly shutdown, the LED#1 behavior may differ:

• - If a startup event is scheduled in System Preferences/Energy saver, LED#1 will stay ON after

• - If no startup event is scheduled in System Preferences/Energy saver, LED#1 will turn OFF

and will stay OFF as long as power cord is kept connected and AC power source is present.

Disconnecting the power cord and plugging it back will turn back this LED ON , even if

computer is still off.

• After disconnecting and reconnecting the AC power source, this LED could remain OFF if

(but is not asleep) and power supply and voltage regulators are working correctly.

• Indicates that computer and video card are communicating. This LED will be ON when

computer is communicating properly with video card. If LEDs 1 and 2 are ON and you heard

the startup sound, but LED 3 is OFF, then the backup battery (on back of logic board) may

need to be reseated, or the video card might be installed incorrectly or needs replacement.

• Indicates that computer and LCD panel are communicating. This LED will be ON when

computer is turned on and video signal is being generated. If LED#4 is ON and there is no

image on display, then the LCD panel, the LED backlight board, or the cables between LCD

and logic board or backlight board might be installed incorrectly, or need replacement.

• First disconnect the power cord from computer, then reconnect it to reset the LED

status, in case computer was correctly shutdown and AC was kept connected since

If second LED is not visible when power button is pressed:

If third LED is not visible after power on:

PRAM, reseat or check backup battery if necessary for proper boot up):

If POST boot chime is not heard, go to No Startup symptom flow,

If POST boot chime is heard, go to No Video symptom flow.

If fourth LED is not visible after power on :

• Verify external video functionality, and according to result check the following items:

If external display works then verify/replace the LED backlight board

If external display works then verify/replace the LCD panel

If external display does not work verify/replace the logic board 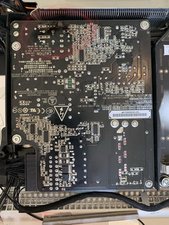