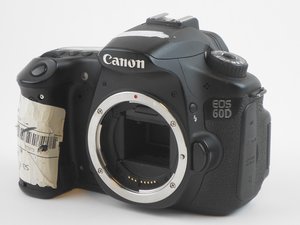 The Canon EOS 60D is a 18 MP DSLR (digital single-lens reflex) camera with an articulating LCD screen. The camera was released August 2010 and is identified by the EOS 60D printed on the front of the camera.

In short, what do i need to re-solder the battery door latch switch?

A few days ago my canon 60d suddenly stopped working, it turned on once after i waited a while but the screen glitched out and it died and wouldn’t turn on since then. I was filming in the heat on the beach constantly in the sun. I was trying to find a fix for my dead camera and some people said i should push the tiny switch that is under the battery door so i did, i tried that a few times, no luck with switching on the camera and i was thinking i’m doing something wrong and then tried it again and it went to one side and then broke off.

Now i disassembled it and found the switch, so now i want to solder it back in the right place and i want to know what tools do i need (Heat gun, solder with a tiny tip) or some kind of paste.

P.S. If you know, please tell me the reason why my camera suddenly died. Could it have been from overheating, because i didn’t turn it off, it was in the sun and the battery was empty. 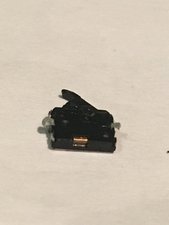 The spot where it was: 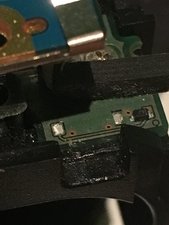 @gvidob I’d use a common soldering iron with a small tip. You will need flux and solder to replace it. If you have not soldered on circuit boards before you will have to practice on some old boards first. Considering to have somebody do it for you is ok too. Yes it is possible that your camera overheated. Once you replace the switch, change the battery and then try again. Let us know how it works out.

I tried to solder a bypass on the broken switch but didn't work cause when the switch got loose it ripped the embedded wire off the board so I didn't bother to track down the line… instead, since I had the whole camera open apart… I got the part number of the little board where the battery switch goes and order it to replace the broken one… is only 35 dollars and opening up the camera isn't as hard so I think any one being carefully enough could do it… you can find this part in ebay under the name of… “CANON MD CG2-3477” or “Motor Drive CANON CG2-3477”… I will post back when I put the camera back together with this part replacement.

Hi, Francisco! I have the same problem, did you solve it? I'm thinking about buying that as board but I'm not sure if that will solve the problem.

Hi Juan, I'm still waiting for the little replacement board to get to me to install it, is on its way still from Japan to me in Tijuana so, once I get it I will install and let you guys know if everything went good! (I hope it does)

I have this same EXACT problem! Camera (70D) wasn’t turning on, noticed the battery micro switch wasn’t there, opened and hound the switch was disconnected…. now what? Did you ever fix yours?

I have the same problem, I will do some troubleshooting and open my camera up tomorrow and see if I can bypass the switch existence altogether since I can't find a replacement just accesible to buy anywhere… i will let you know how it goes, and see if this might help others.

Hey, did you find a workaround? If so, let me know, because I have the same problem and I have a plan to disassemble the camera

Can you somehow bypass this switch?

The battery door microswitch on my canon 200D broke and fell off.

Since the replacement board is relatively expensive (the switch is on the main PCB), I decided solder on a bypass cable and just short the two connection points (one of them seemed to be connected to ground also)