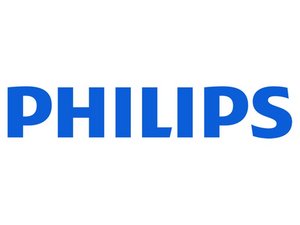 Only backlight is working, neither image nor audio, 55PUS6162/12

When plugging the TV in it turns on by itself. But only the backlight will turn on, the screen will stay completely black and no sound will play. It’s also not possible to turn off the TV via the remote (there’s no power button on the TV itself).

When contacting Philips customer support (after giving a couple power cycles a try) they gave us a software upgrade that we should install via a USB stick, but given we don’t have any image we don’t know if it actually worked. Only thing we know is that it didn’t fix the issue we had, but maybe we have new software on the main board now :D

Given the current situation I would have to ship the TV to a repair shop, which is ridiculously expensive where I live, so I decided to open up the TV instead and give it a try at manually fixing it.

Unfortunately neither the power supply board nor the main board have any visible damage like bulging capacitors or burned components. 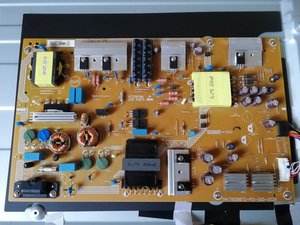 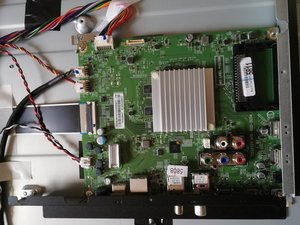 I did a couple checks on diodes and transistors in the circuit, some of which behaved weirdly, but I guess measuring in circuit is not really reliable. Before unsoldering anything I wanted to get a second opinion though.

I also tried to measure standby voltage, but it’s not clearly labeled. But I guess it is the 3.5V label, aka the lowermost pin. Measuring the voltage on that I saw a steady and really quick drop. Plugging in and positioning my multimeter it already was at ~2V and within 5 to 10 seconds it’s down to 8mV, which might as well be 0V in the context. The behavior is the same with the Main Board and/or backlight unplugged. 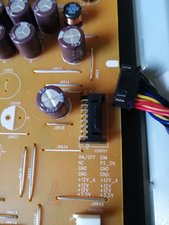 Which component could cause that behavior?

What other measurements could I do before unsoldering anything?

The patch that Philips sent me actually worked, there was just something wrong with my USB drive that didn’t allow it to be installed to the TV. Another USB drive worked out in the end. No idea what’s going on with that standby voltage measurement, since it is repeatable even now that the TV works again.

hello, i have the same problem

can you send me the patch and instrutions ?

- Insert a blank USB memory stick into a computer.

- Extract the downloaded software file in the root directory of the USB memory. The extraction of downloaded files (zipping) may vary slightly between different laptops or computers.

- Rename the downloaded file to "upgrade_loader.pkg" (without quotes).

- Copy the “upgrade_loader.pkg” file to the root folder of the USB memory.

- Eject the USB memory from the computer.

Note: Make sure the file is named "upgrade_loader.pkg" and is placed in the root directory of the USB memory (not in any folder).

- While the TV is ON, unplug the TV's power cord.

- Disconnect all accessories and devices from the TV. Including the CAM module, if you have one.

- While the TV is OFF, insert the USB memory into one of the TV's USB ports. Preferably use a USB 2.0 port (black inside).

- Connect the power cable. This will start the update.

- A message “Software update in progress…” will appear on the screen for a few seconds.

- Wait 15 minutes for the software to load on the TV.

Do not interrupt the process by pressing buttons on the TV or remote control. The TV will restart automatically after the installation is complete.

4. Disconnect the USB memory from the TV

Leaving the USB memory in the TV can restart the entire process, which may damage the TV. Therefore, we recommend that you immediately disconnect the USB memory from the TV and delete the file.

-Disconnect all cables and devices from the TV

- Wait 10 minutes after the LEDs on the TV are switched off before reconnecting the power cord.

6. Update the TV to the latest standard software

After the successful reset of the TV, update the TV with the latest official software.