first, some context: I’ve got LineageOS installed on my phone and a few days ago, it just started bootlooping: it displayed the LG logo for a long time, then it showed the Lineage boot animation for a bit and then restarted. I installed a backup, then I completely reinstalled Lineage, but it still didn’t work. I then found out that it’s probably because of a bad battery or due to the CPU’s solder points becoming bad due to the CPU getting hot. The battery is only about a year old, so I tried “baking” the CPU (I’ve had the thermal pad mod on the cpu for quite some time but maybe that’s not eneough to prevent this problem). By that I mean I took a hot air gun and pointed it at the CPU and the storage chip. After that, the phone booted up again, but the screen was very dim. After a day, it went bootlooping again, so I used the hot air gun again, but this time more thoroughly. It has now been working for two days (which doesn’t mean that the CPU won’t come loose again, apparently baking is only a temporary fix) but the screen was still just as dim.

When I say dim, I mean the screen still emits some light, so the backlight is still working, I guess. It’s just not nearly enough. I noticed it on the first boot up: even the LG logo was dark. I can use the phone indoors, but outdoors when it is sunny it is unusable. Moving the brightness slider still changes the brightness, so that is still working, the screen is just overall way too dark. I didn’t enable any energy saver mode. When I wake the phone up, it is sometimes a bit brighter than other times (still not as bright as it should be, though). Auto-brightness is turned off.

Due to the symptoms I’m thinking that it is a hardware problem.

If the backlight filter, the diode (or the coil for that matter ;) ) died, would that kill the backlight entirely, or could it cause a dim backlight like I have? I don’t think I disconnected/connected the display cable while the battery was still plugged in, but I’m not sure.

Could it be that the whole problem is related to the CPU still not having proper contact with the pads?

The whole board looks clean, I didn’t spot any water damage. The pins of the screen connector are also intact.

I replaced the screen with a known good one. The backlight was still very dim. So there’s almost definitely a problem with my motherboard.

@epkrichi sounds like you have a lot going on here with your PCB. It’ll be a bit complicated since there are multiple things that are not quite as they should. Since there is some repair information available but not as much as we would like to, I’d try a new display assembly as a starting point. Anyhow here is what I do have which is the troubleshooting section and the schematics for your model. Hope this helps getting you started. Trouble ShootingSchematics

Of course you could always try and install jumpers like these 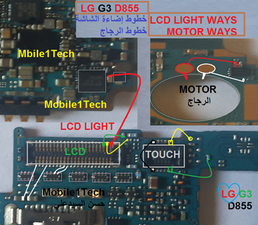 and see if your backlight comes back on :-)

So I just checked the board a bit and found that I had 22.97V on the LCD connector on pin 2 which leads to LCD_LED_A. That's what it should be, according to RevB_0213 on page 25 of the schematics, I think (it says "Vout_max = 22.7V at Vf=3.2V, 2P7S, Headroom V=0.3"). Should that mean that the screen is at full brightness, or is the brightness controlled through another pin? If it does mean that the screen should be at full brightness, then does that mean that the backlight of the display itself is damaged?

OK, then I'll try to find a cheap screen/phone. I'll update this thread if I find one. Thanks a lot for your help @oldturkey03 !

@epkrichi good luck and keep us informed. Really hope it works out for you.

So I bought a broken LG G3 for cheap. The owner said that the phone doesn't do anything at all (which I could now confirm) which made me think that the screen and the backlight is probably still working. I then put this new screen into my phone but the backlight was still very dim. I then applied a bit of hot air to the CPU of this "new" broken phone, because honestly I do not know how to diagnose the board properly. As it turns out the hot air was all the phone needed and it turned on just fine - and the screen's backlight was as bright as it's supposed to be. So basically I've now got a new/used and fully working LG G3 and my own LG G3 with a dim backlight. I guess I will just use this new G3 now, but it would still be nice if I could get my own G3 working properly again. (The only thing that's a bit unsettling is that the new phone only turned on briefly and crashed and didn't do anything again. I just applied even more hot air and it has been working fine since.)