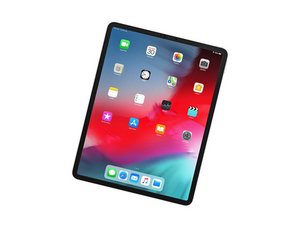 iPad Will Not Charge Normally Or Power With Screen Connected.

Working on an Apple iPad Pro 3rd Generation 12.9" that has a weird issue. When the display is NOT connected, the iPad will charge and power on normally. I know it's on because I can hear notification sounds and the charging notification sound.

If I connect a brand new display to the logic board, the iPad will not turn on at all. When I connect the iPad to an 18W wall charger and a USB-C ammeter, I can see that the iPad is attempting to charge, but constantly "resets" after just a moment or two.

When the screen is not connected, the charging behavior appears completely normal for this model which is 8.93V and 1.87A holding steady.

I have experimented with the 4 display connectors to see which connector seems to be the culprit by removing one of the 4 cables at a time and retesting after each one. I found that the LCD connector (labeled Connector 1 in my image below) is the one that seems to be at fault. When I have the ribbon cable attached to that connector, the iPad will not power or charge. When I disconnect that cable, but still leave all 3 of the others, the iPad will power and charge normally (but of course I cannot see anything on the screen because that connector is for the LCD)

I have tried two different displays and they both behave the same way. 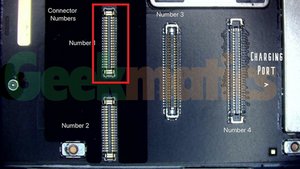 And just as a side note, my measurements more closely resemble the listed measurements on logi.wiki for the iPad Pro 4th gen. ZXW does have part/circuit names listed for the 4th gen, but not the 3rd. It seems like I could likely use the 4th gen boardview to help me with my 3rd gen.

@techwizards I have boardviews for the 3rd gen and it seems like the readings on logi.wiki are not what I would expect. I don't have them though for 4th gen, but I was going to mention that I think the 4th gen readings are probably fairly accurate also for the 3rd gen. I believe they use an interchangeable display, so that wouldn't surprise me much since the 3rd and 4th gen are not terrifically different other than camera and a mild SOC upgrade. That doesn't get me very far in finding the issue, but I will let it marinate in my brain.

@flannelist I appreciate you taking some time to look at it. Thank you.

So. My brain is a bit unfocused today, but here are my thoughts having read the other comments and letting it marinate. 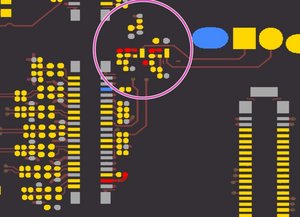 I am less likely to think this is an SOC issue. Maybe yes, if it was powering and booting properly with all the connectors in place, just no image. I2C lines, having 1.8V is a good start, but I2C is a data communication protocol which means that chips on either end send or receive specific patterns of voltage pulses. And the pulses are likely too brief for a multi meter to detect or display in real time anyways. That's what an oscilloscope would be more useful for. Having the voltage there doesn't necessarily mean the communication is occurring, or is occurring correctly. I am more likely to think this is an issue with something in the power up sequence. Like it's getting to a certain point, hitting a problem and then restarting hoping the problem was resolved, but it wasn't.

Thank you so much for your reply, @flannelist. I decided to check out the components you suggested I look at. Battery connector looks perfect. I checked for shorts right there at the connector and did not find any.

The area you have circled in your picture has several circuits in that general area such as:

All of the components in this area are essentially all capacitors and resistors with the exception of two MOSFETs that are for the gas gauge circuit. Looks like this whole area is related to battery/battery level detection, battery data communication, thermal sense, and the like. I did check all of the resistors and they are all good. There are no short to ground in any of these components and I am getting the 1.8V as I should be.

I do not yet have an oscilloscope to properly test the I2C data lines.

Also, there is continuity between pins in each circuit, so no broken traces.

@techwizards Hmmm. At this point I am wondering if it's an issue with the PMIC (the big one, since that's the one which regulates most of the display power). or Maybe it is the SOC. Have you tried getting video out without the last connector attached? I don't know that it will work, but it's worth a shot? I know those support video out via the USB C port.

@flannelist I have not yet tried the external video test. I have a Thunderbolt to USB3/SD Card/HDMI-out adapter that is meant for MacBook Pro's with Thunderbolt only ports. I could try this adapter in the iPad Pro today once I get to work and see if I can get external video. I'll report back with my findings later on this morning. Thank you again for helping me out with this.

Also, I received some more information about this iPad from the customer yesterday. Apparently, this iPad originally suffered a broken screen. The customer took it to another shop and had the screen replaced which it worked fine for "about 30 minutes" and then the display went black. The customer took it back to the shop and they kept it for about a week and ultimately returned it to the customer and said, "I don't know. It doesn't power on at all anymore.". I could see that the screen they put on to replace the original received some technician damage to the ribbon cables at the upper left side of the screen. Looks like pry/opening tool damage. That is what initially caused me to order a new screen (and then another one when that one didn't immediately fix the issue) and it was after the second replacement display that I ordered did I begin my troubleshooting and discovered that it doesn't power/charge when the screen is connected, but does when it is not (or at least when that one cable isn't connected)

This could be a problem with the chip that controls the LCD data input.

So it looks like Pins 29 and 27 are the I2C data lines for the display connector. I2C_TCON_SCL_1V8_CONN and I2C_TCON_SDA_1V8_CONN, respectively.

I have measured each resistor in both circuits and all of them are normal. There are no short to ground in either circuit. I am getting 1.8V on both circuits.

Am I looking at a SOC (CPU) problem here?

Thank you for your input @guardian10 . @refectio and @flannelist would either of you mind taking a look at what I have here and give any suggestions? I am thinking this is an SOC issue.