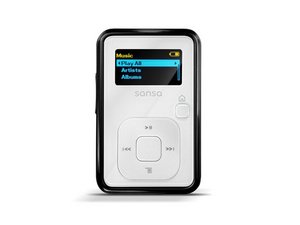 The Sansa Clip+ is a music player by SanDisk that was released in 2009.

I have had the common issues with this device freezing. Long story short, it appeared to die after crashing when refreshing the music database. A few years later I plugged the Clip into a computer and it showed signs of life. Thereafter, I would try to troubleshoot it every so often. Eventually, I was able to reset it, get into settings without it crashing, and performed a factory reset and reformated it.

Now I have it working sort of normally (still crashes more than it probably should), but it has no music on it. It does not seem to be able to access mp3s on a microSD card. I cannot get any of my computers (Win XP, 7, 10, osx, Linux Mint (18.2), Ubuntu(22.04)) to recognize the device and access the storage, so I can transfer mp3s to it or at least update the firmware. I have set it to "mass storage class" as recommended by SanDisk for troubleshooting connections. Each version of Windows seems to see it as an "unknown device" but does not seem to mount it as a storage drive. OSX and Linux do not acknowledge it at all. Occasionally I will see normal behavior from the Clip with the alternating "Connected" and "Writing" screens, usually when connected to the Linux Mint computer but with no corresponding entry in /dev/ or /dev/bus/usb/.

Has anyone encountered this issue and fixed it? Initially, I assumed a compatibility/driver issue, but I just tried an old XP computer and it also could recognize the Clip. I am beginning to wonder if this is a hardware issue.