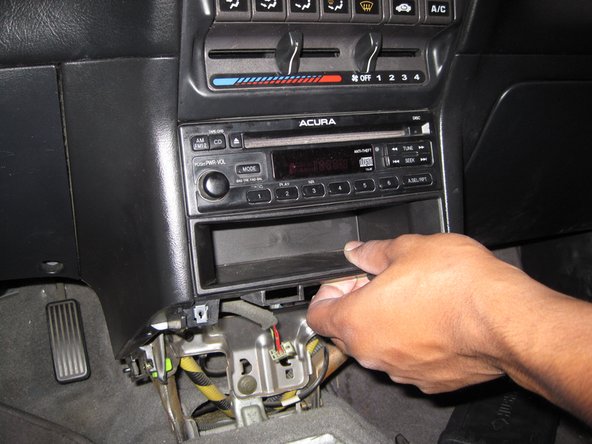 It is extremely difficult to show the location of the screws and connectors that hold the factory stereo in place while it is still installed. This guide shows the location of these components on a removed stereo to aide in locating them.

Thanks for posting the details, this was much more accurate then the instructions provided by crutchfield. Note that on step 8, the metal bracket beneath the screws is sharp and can cut the back of your hand. Also, I found it easier to remove the screws with a socket than a philips.

This guide was the best guide I found by far! The pictures helped a great deal. I actually skipped removing the entire center console. I have very small hands, so I was able to simply remove the ashtray area and slide my hands behind the head unit to unscrew the two bolts holding the unit in (although I scratched my arms a little doing so). I also found using a socket easier than using a screwdriver.

Very helpful tips!! However if I have a stock Integra alarm how do I bypass alarm going to stock stereo when I install new stereo?

Just finished this yesterday (May 3, 2017). It's a tough process for a noob like me, but it is doable! I can second the need for a socket to get those ridiculous, down-facing hex head screws out. With all the money I saved on installation, I'll be able to afford physical therapy to fix everything that happened from being upside down, rear end hanging off the driver seat, head behind the dash, and hands craned into tiny, sharp places! Yay DIY?