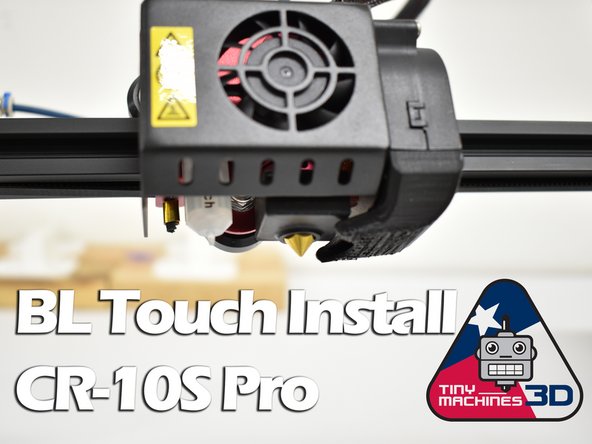 For this guide, we have disassembled a CR-10S Pro so we can better show how to install a BL Touch kit. If you leave your machine assembled, the processes are the same but you’ll need to protect the build surface if you’re going to use it as a workstation. Gravity cannot be disabled so keep that in mind.

Look back on earlier steps for images to help with reassembly.

Look back on earlier steps for images to help with reassembly.

My LCD display got blank after turning on my printer once the display was flashed. I thought it would be fixed by the time I uploaded the hex.file but it didn't work. Now my printer is frozen and I dont know what to do. Is there an advice for this situation I will appreciate any help thank you!!

If you purchased the kit from Tiny Machines 3D, you can contact us directly at support@tinymachines3d.com

This guide is for customers but as it is public, it is open to all as reference. If you are having issues beyond that, check wiring.

So, does this mean that you would recommend that no one use your firmware upgrades unless they purchased their CR-10S Pro V2 from you? Unfortunately, I received my V2 before I learned of you guys and the very cool stuff you have done related to this printer (else, I definitely would have purchased from you). I was looking forward to upgrading with your firmware(s).

No, we don’t mean this at all. We want people to understand that there are some differences between our firmware and stock and the configuration outlined in the guide must be followed for the firmware to work correctly.

I had bought the BLTOUCH V3.1 with the jumper and the extension cable from you, but which firmware should I use now on my CR-10S PRO? that stock of Creality3d CR-10S PRO V2?