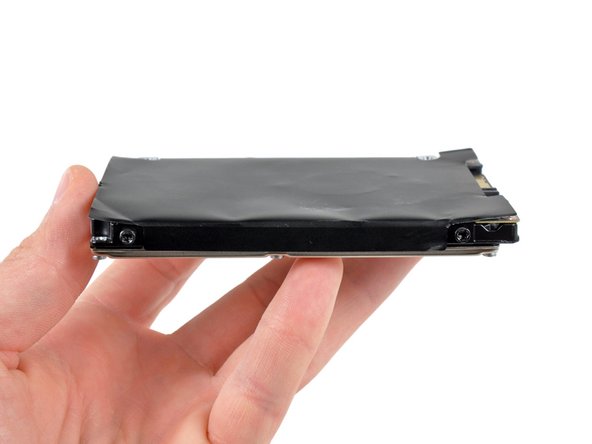 Use this guide to completely replace your mini's hard drive.

no need to remove the logic board! the disk comes out after step 12.

Also you do not really need to disconnect the antenna. Just be carefull no to break the wire.

I put the sheet that was around the old hard drive over the new one - not sure if its needed?

Last thing to do is go here to enable trim: http://www.groths.org/?page_id=322

Very helpful guide, thanks! As many have said before, I would not detach the fan or antenna, just move it out of the way.

One very trivial tip: slide a piece of paper over the logic board as soon as you've removed the fan, as a protection against accidentally touching the components with your fingers or tools.

I did not reinstall the plastic cover on the HDD. This is only to protect the logic board of the HDD, which ofcourse is very well protected in SSD's.

Dismantling the Mini was simple, but the two hardest steps when installing a new hard drive were sliding the drive back in aligned correctly, and replacing the antenna grill.

Even with the logic board pushed out, I found it difficult to line up the screws on the hard drive and get it seated properly. As for the grill, it would not line up with the screw holes. I had to use the Mac Mini tool hooked into a hole in the grill as a lever to lift it up and in towards the lip of the rim it was sitting on. There was an audible snap as it settled into place.

That is an AMAZING tip!!!

I've done about a dozen mac mini to SSD upgrades over the past few years but I've only owned a logic board removal tool for my latest upgrade.

I was struggling to get the drive pegs into the grommet, and the usual 'turn it upside down and giggle it around' trick just wasn't working for me.

I tried getting a spudger underneath the drive to lift it up into the grommet holes but there wasn't enough clearance to get any leverage.

I used the mini opening tool with one end underneath the drive, and the center portion sticking out perpendicular to the motherboard (I'll add a picture) to lift the drive up and into place.

I too heard the satisfying click and it was glorious...

THANK you so much for the idea to use the logic board removal tool. It's now a permanent fixture in my new iFixit Pro Tech Toolkit (which is TOTALLY worth the money btw).