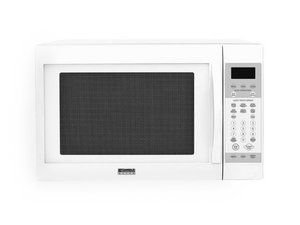 Why does my microwave not heat up food?

My microwave turns on and runs,display is fine,timer and all works but it just don't heat up anything!

joshua, for the longest time the consensus on iFixit is to replace the whole unit. Microwave ovens generate high voltages and dangerous amounts of radio-frequency radiation. Attempting to repair one is NOT for the amateur. I advise recycling it and getting a new one. On the flipside of this, you may just give us the serial number and we can try to find a common simple problem, but anything above that, you should leave to a professional.

Joshua my microwave looking good what do you suggest? when it is just not heating everything else looks good

I have a Kenmore microwave 709.80333310 that I bought new and have used about two months. Lights, timer, display all work. When i push start it sounds like it working but the turntable doesn't move and it doesn't heat. What da ya think?

I received a microwave to repair and resell a few months ago with the identical problem. Everything worked except that it refused to heat, so the problem was obviously not the ceramic fuse(s) hidden inside microwave ovens. I removed the outer cover, shorted the super capacitor so I wouldn't get zapped, and proceeded to investigate. I did go ahead and check the fuse just for the heck of it, but if it had been blown the microwave would have been totally dead. No lights, no nuthin'. I noticed that there were 3 micro safety switches on the door latch assembly. Upon testing each, I discovered that the top two were working just fine, but the third one at the bottom was not working. I proceeded to replace it with a like switch that I had salvaged from another appliance, tested the oven, and it has since worked perfectly.

Where is the door latch assembly

Directly inside the control panel where the latching hooks on the door enter the panel.

It baffles me that the electronics can be working but a broken door switch somehow prevents the microwave from heating. How do you test a micro safety switch, with a multimeter?

I hired a repairman who told me the same thing. Too expensive to repair....just buy a new one....is this the only solution? Isn't there enough waste? The oven was manufactured in 2006!

Yes there is and you are right, but if not done right those things can do you harm. Do the risk outweigh the benefits? What microwave do you have and what does it do. Lets keep it academic and see if we could find a hypothetical solution to your microwaves issue.

You are quite right it seems that they don't want you to fix things anymore. The switch's that make up these interlocks are simple and cheap but once you put an appliance part number on them a $2 micro switch becomes a $56 interlock switch. Find someone with a good junk box and buy them a case of beer . On mine the switch was simple I have several old ones but after several years the mounting plastic is falling apart I have to get creative but Im sure it will work the old switch was defiantly defective but the bracket is going to need some extra work. selfpg@telus.net

i have kenmore elite microwave

First, put your nose to work. Sniff around the control panel. If it smells like burned electronics, the unit is done. If it doesn't smell, then it could be one of the door safety switches, or the super capacitor could be dead.