Transistor overheating, fans at full speed. and Mac not booting

Hello and thanks for accepting me in the forum. 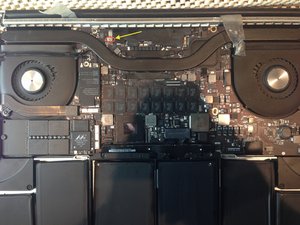 I recently brought my laptop to the apple store due to being unable to boot it. It was diagnosed with liquid damage, which required a new battery and a new logic board, and you may imagine the price :/ It was for this reason that I decided to try and fix it myself if possible, and came across this helpful website.

After following some guides here, including placing the logic board in isopropyl, I managed to turn it on without a battery, and it worked well for the whole past Saturday. I decided then to buy a new battery, which I ordered on Saturday night.

However, the computer would not turn on Sunday, Monday or this morning. I though it could be the need of more power, and I received the new battery today afternoon, and yet it keeps not booting. Fans would start normally and then just rocketing at full speed.

I then moved on to see if there was any part getting hotter than others, and I found out this little transistor placed in between the left fan and the processor was awkwardly hot. It was the only area on the board getting this hot. After taking some close pictures, I found out it had some green corrosion on top of it, although nothing visible on the pins. I brushed it as much as I could using alcohol again, but it never responded back. 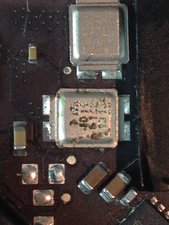 My question would be, is it possible that fans getting at this speed is due to this piece being faulty, and then making the whole board failing at boot? If so, what could be a solution?

The fact that worked the whole day Saturday is what makes everything even more complicated, and I even bought a new battery thinking it would work from that moment on :/

Many thanks in advance.

After leaving it for 20mins, it suddenly booted, so I had the chance to run memtest in Terminal (no issues found) and then the normal Apple Hardware Test, which displays "No trouble found".

I am now going to run the extended testing in the Apple Hardware Test option, and I will provide you with an update with the results.

Hot as in it burns incredibly hot to where you can't keep touching for more than a second?