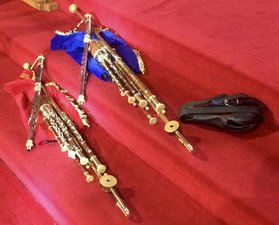 Could someone please confirm if this SSD would work with my 2015 MacBook Pro. Which is a 15" i7 2.8 GHz Quad, 1 TB SSD already installed.

I'd like to replace it with a 2 TB SSD due to the fact I use it as a studio host machine and sample libraries perform like a gem on this SSD. But, I now have about 480 GB left on the drive and have intention of adding further libraries that won't take up much.

I came across something of interest, bear in mind I used to work for Apple as a hardware engineer until late last year. If you have a look in system report, notice that there is no PCIe reference, instead it's referred to as SATA/SATA-Express, though this is a PCIe controller. Apple are rather secretive about matters like this.

I got response from eshop.sintech.cn who sell NGFF M.2 PCIe adapter:

So i think it's only software problem.. Samsung 960 PCIE SSD will work if you install Windows 10 or Linux but MacOS maybe in future.

OS-X/MacOS only has the drivers for Apples custom SSD's

So apparently the MacOS High Sierra will support nvme ssd out of the box.

For the benefit of all wanting to upgrade, I would like to confirm my successful upgrade of

The stock drive was an Apple 512GB Samsung that was running at the full PCIe 3.0 with x4 Link Width(4 lanes at 8GT/s) shown in Apple System Profiler.

After install of Samsung 970 Pro NVMe 1TB, I at first got PCIe 3.0 x2 Link Width( 2 Lanes at 8GT/s). I then reset SMC and changed to a second adaptor (I had ordered two from Sintech of the exact same type) and rebooted and got the full x4 Link Width.

I have been able to swap back and fourth now and get x4 link width each time so I think it was likely the SMC reset that helped it change over. That said I have had a few crashes that may have been to do with slightly different seating depths of the pins on the Sintech adaptor card. It all seems to be working well now. I have been able to sleep and wake without issues. Restart works. I have not yet tested Hibernation.

iStat menus used to report two temperatures, SSD A & SSD B, but I don’t get those temps now but I do still get SSD temp reported separately.

After installing Smartmontools with directions from this thread I can see both SSD temp sensors. This suggests to me that its just iStat menus that isn’t able to read the NVMe SMART protocol properly. That in it self might be connected to the fact that it seems Apple have not implemented it fully. Disk Utility lists SMART status as “Not Supported” and yet I was able to get a full smart report in Terminal after install SMARTmontools.

Thanks to all the threads and input from everyone! 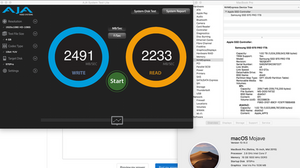 All is operating very well. No sleep issues. Very fast. One thing to note is that I had my battery replaced recently and when the machine came back from the replacement the SSD was only getting 2.5GT/s link speed. Resetting SMC did not fix it. Resetting PRAM brought back 8.0GT/s link speed. AJA speed test was down at ~700MB Read/Write while on 2.5GT/s.

Running at about 2450 Write and 2200 Read but does fluctuate a bit. Have seen Read drop to ~1100 after lots of reading. Not sure whats happening there.

Power usage for the SSD is between .27-.39A(idle), .69(heavy standard usage) and 1.5A(aja Speed test benchmark). Seems like about average of 0.45-.55A(using iStat menues to check). Great upgrade option next to the Apple SSD options. I am very happy.

I had the machine crash and then not POST at all. Tried changing adapters. That worked briefly and then same symptoms. Have had to change to a slower OWC drive.

I’ve got a support request with Sintech.

So in the long term you had to replace the Samsung Drive due the ongoing problems? :( makes me a little hopeless on replacing my SSD :(

Another follow up. I had ordered more sintech adaptors and the more recent one has been in there for about a year operating flawlessly. I think I was having issues with the adaptor and I suspect it was the way it was seated. I had suspected it may have been over seated and contacting some of the pins on grounded connector shielding.

The new adaptor and a more cautious seating has proved solid.

It’s been a good upgrade that I will install on client machines. Now that I know what to look out for.