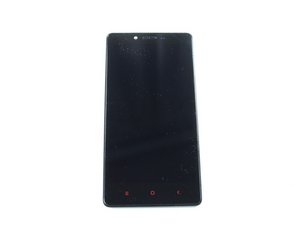 The first phone in the Redmi Note series, released in July, 2014 and produced by Xiaomi. The Redmi Note TD-LTE 2014022 was the first Redmi phone to feature the large 5.5 inch display.

Touchscreen does not accurately respond?

The touchscreen often does not respond to touch and will sometimes require multiple taps or swipes to perform a function.

my New mi max 3 touch does not work

Hi! I had this exact same problem but I ruled out a hardware issue because every time there was slow to none response, if I turned the screen off and on again, it would fix it. I looked for a solution and after trying many, many things I discovered the problem was that I was using the Full Screen option offered by MI, i.e. the option to remove the three main buttons at the bottom of the screen (Back, Home and running apps) and to control the phone with gestures. After going back to the classic three button style, I restarted the phone just in case and I haven't had any more response issues in two days, I think it was a success!!

hi are u still facing the problem?

If the touch screen is still responds to touch sometimes, it may be a software calibration problem rather than a hardware problem. To calibrate the touch screen, follow these steps from the troubleshooting page.

It started after i updated to miui 10 or thhe update before it.. now i am stuck and cannot downgrade my phone rom! It sometimes don't detect the touch, for a second or two.

Your phone may be crashed, try to restart your phone or get a factory reset to have a try.

Before that, see the video below and know that Redmi Note 8 pro has both touch and heating issues. Check whether your phone also has these.

The problems on Redmi Note 8 Pro are touch issue and heating issue.

The first issue is the touch issue on Redmi Note 8 Pro, which I had noticed quite unexpectedly. Redmi Note 8 Pro display is sometimes unresponsive along the edges of the screen. I had thought that this touch problem would be a bug or defect on my device, but came to know that a lot of people have experienced this too. This might be due to the cheap quality touch digitalizer used by Xiaomi on this phone.

The second issue is the heating issue on Redmi Note 8 Pro. This phone was widely advertised by Xiaomi as a device with liquid cooling to prevent overheating of the phone. However, after playing PUBG mobile for a short while in an air-conditioned room, the phone started heating up. On testing, it showed a temperature up to 46 degree Celsius !

i’m having the same problem with my redmi 7a, any progress with your device?