My "r" key usually doesn't work, what should I do?

so my “r” key usually doesn’t work, I have to press it a bunch of times then it’ll work and some times it does two r’s “rr”.

I usually wipe my keyboard with a some what dry clorox wipes and I had some dirt around that area so I wipes for a minute there. But this was a week ago and my r key has been giving issues for just the past two days.

I don’t think it’s software related because it’ll work after a few tries. I tried removing the key and cleaning it (had a lot of dust and dirt but it didn’t help.

Under they key is a white mushy suction cup button (see photo) and once you click the key it pushes that down. Even without the key on and if I just pushing the white suction key down it does the some problem and usually doesn’t work. Basically it doesn’t seem too responsive. 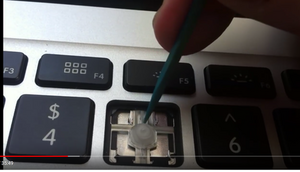 What are my options? Obviously frustrating since they “r” key is a common key. I don’t want to replace they whole bottom since I just installed a new battery two weeks ago (no problem with the old, just had a 1,500+ cycle count and didn’t hold much of a charge.

also my v key works and so does my left command key but when i press them together (to paste) some times it work and some times it doesn't (no matter how many times I press it).

neither button is stuck so I think the spring is fine and so is the button, but I think the rubber cup inside is the problem. will buying buttons with cup help or do I need a new upper case (whole keyboard)?

@jasonfodor - Well, to start off I would be careful with the damp wipes as they tend to be too wet! I use a paper towel and spray some household cleaner on it (one or two hits) and then wipe the surfaces as you want it more dry than wet. It's likely this is what messed you up or whatever spilled into the lower sections of the keyboard.

At this point, you have two directions: The easy way (more expensive) or the harder way (less expensive but a lot more work).

In either case, the process is the same, follow this IFIXIT guide: MacBook Pro 13" Retina Display Late 2012 Upper Case Replacement then you either replace the uppercase MacBook Pro 13" Unibody (Early 2011-Mid 2012) Upper Case or go deeper into replacing the discreet keyboard. Here's a vid that gets into it: Macbook Pro Retina A1425 keyboard replacement and here is the needed part: Keyboard + Keyboard Backlight + Screws (US English).

I'll warn you this is a big job just replacing the uppercase and even bigger replacing the keyboard alone. If you're not comfortable in doing either I would recommend you just let Apple do it.