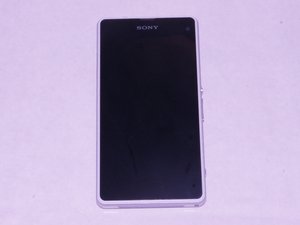 The Xperia Z1 Compact is Sony's premium camera phone. It is similar to the Xperia Z1 model except smaller and less expensive. Its key feature is a 20.7 megapixel sensor. Upon release the available colors were white, black, pink, and lime. This device can be identified using the model number (D5503)

Phone doesn't charge while powerded on

So a bit of a tricky situation here…

So recently my phone dies pretty quickly. I have it charged to 100%, it runs for a while and at around 40% or so left, it would power off (but this is not the actual problem), or so I guess)

As soon as I connect it to a power source, it charges for a few seconds, then the “SONY” screen appears (is it trying to boot?) and then it goes back to dark… and it is apparently NOT charging further.

So I disconnect and reconnect to the power source, but then again, it charges for a few seconds, “SONY” screen appears, it goes back to dark and stops charging.

Another interesting thing that happened:

Sometimes I do manage to turn my phone on (at 1-3% of battery), but when my phone is turned on, it does not charge although connected to the power source.

Only after it’s turned off (by running out of battery or by turning it off manually), it charges for a while, and then as written above.

A few things to mention:

1. I have tried connecting to a power outlet and to my laptop (same result, also laptop doesn’t recognize the device)

3. Phone battery I guess is fully functional, especially since I bought a new one and inserted it today

My next step would be a hard reset, but then again, it will never have charged enough power to do that

Now I essentially carry a brick in my pocket :p

Also, with already 4 years of “service”, it might be that my phone has pretty much hit its life expectancy.

I’m guessing a bad charging socket on the phone which would mean getting it replaced would be required.

The charging port is soldered on the logic board so it may not be worth getting it replaced.