Swapped out the battery on a Mac Air 13 inch early 2015 because the battery was not charging.

Put in a new third party battery, does not charge either. Third- party battery came with 35% charge thankfully, so will power on, and coconut battery shows the battery is in good condition but just will not charge, and it recognizes that it’s plugged in.

Ive tried both a 45w and a 60w adapter for the device, and neither will charge the computer.

Mac will power up on adapter only with battery completely removed. During this step, the light on the magsafe was unlit.

The light *was* on both power adapters, showing orange. Sometimes it will be orange and sometimes the light will not come on at all, but the mac will power up just fine.

Logic board replacement? Not sure what’s causing this. 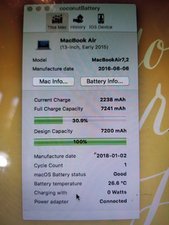 The charging logic on the main logic board has a problem. A good Mac repair person can fix this. Or, you could replace the logic board.

I would recommend you check your MagSafe adapter & the DC-In Board. Review this Apple T/N: Apple Portables: Troubleshooting MagSafe adapters. Also Make sure you are using a real MagSafe adapter! There are quite a few fakes out there now. Lacking safety features, cheap MacBook chargers create big sparks

I appreciate the response. As this is for a client (trying to take side jobs while in school) I will recommend we replace the logic board.

I am not well versed enough to do any soldering work to fix the issue, nor could I find any .brd files for this model to work with OpenBoardView to make a valid attempt.

I do wonder how many repair shows actually do their own soldering work versus replacing the entire board? I wonder what the cost difference is.

Its a common enough issue ;-} Louis Rossmann has done a few YouTubes going over the issues. Its a lot cheaper repair.