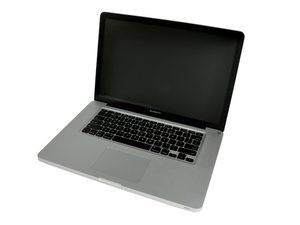 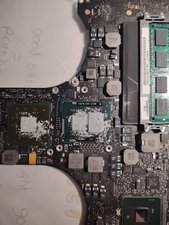 I've got a MacBook Pro mid 2010 15in model with a Core i5, which I performed some upgrades on:

I then used the machine for a few days, first with macOS Catalina (the patcher), then elementaryOS Linux.

Today I received the correct T6 Torx to replace the thermal paste, so I did that, however a small dribble of paste landed on the board, which I wiped off with some a dry tissue.

I then tried to start the machine, however it didn't work. Turns out I hadn't seated the keyboard connector properly, so the power button didn't work.

I fixed that, but now there's another problem - when I press the power button, the fans spin but there's no other signs of life apart from the battery indicator on the side and the charging light on the MagSafe connector.

I've tried resetting the NVRAM and SMC, to no help. I tried reverting the machine completely to the original configuration (bar thermal paste of course), which didn't work. I also tried completely tearing down the machine and putting it back together.

After the second teardown, I now get the startup chime, but still a black screen, the backlight isn't on either. I've checked the display cable on the logic board and it's fully home.

I'm at a loss as to what to do now, any help is much appreciated.

The one on the left is the old, original paste, centre is when I cleaned them now, and the right is the new paste. Didn't manage to clean much between the capacitors but considering they were drowned in gunk before I didn't consider it an issue. 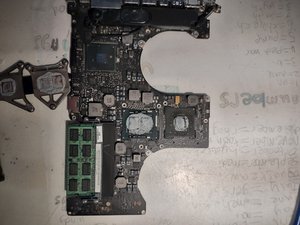 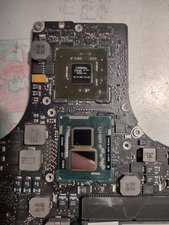 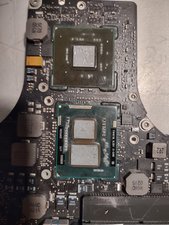 What was the thermal paste you used?

You may want to pull the heat sink off and inspect the paste. Take some pics before you alter things and post them here for us to see Ajout d'images à une question existante

I've just edited the post with an image, not the neatest job, but it was my first time doing thermal paste and it was a bit trickier to get it even than I imagined. I used the surface spread method, as recommended for my processor and covered the entire silver surface. After this photo was taken, I wiped some of the dribble on the green surface off with a paper towel. Thanks.

Open the media toolbox and double click on the image once you have your insert point where you want in in your text.

Who's thermal paste did you use?

@danj fixed now, thanks. Not the neatest job, I know, but it was my first time doing paste, bit trickier to get it neat using surface spread than I thought. All 3 dies are well covered though, reckoned it was better to have a bit too much than too little. After I took this photo I actually wiped some of it on the green surface off that was near the edges.

The paste on the chip carrier is what did you in. I would pull the heat sink one more time ad make sure you fully clean the carriers.

There’s a documented problem with the MBP 15” 2010 logic board. Capacitor C9560 is failing on theses boards causing kernels panics, glitches on the screen, black or white screen on start up etc. Just make a search on Google for “820-2850 C9560”. The capacitor must be replaced with a reliable one.

Thanks for your reply, this seems a bit odd as it was working fine before, but it might have failed during the repair I guess. How hard is it to replace this component? Would this one work: https://www.ebay.co.uk/itm/173715283689

Here are the specs of C9560: 330UF, 20%, 2 volts, Poly-tant, B2-SM. Your ebay link seems to offer the good capacitor but It's the same size that is actually installed on your logic board. I prefer to use a larger one of the same values that I harvest on donnors boards like the MBP 820-2936 or the 820-3115. Check Louis Rossmann on youtube. He posted videos of this capacitor replacement (board 820-2850)

@lemerise Thanks - any particular reason to use one of the larger ones? I watched a video where someone replaced it with a larger version and they moved another capacitor, think I'd rather use an original if it comes to that.

no problem if you use the one of your ebay link.

@lemerise just tested it and it reads no voltage so I assume it's faulty. What else do I need for a replacement? - apart from the capacitor and a heat gun. Is 300W enough or is it too little? Much appreciated.