Why does my iMac crash on boot and display this weirdness?

Most of the time my iMac 2017 21.5” crashes during boot. The normal white apple appears and the loader bar starts progressing, but then the screen blinks to black. I think the keyboard capslock light can be turned on/off, but it makes no sounds or reactions. I have to hold the power button until I hear a very quiet fan power down. Then I can attempt to boot it up again. Holding down shift will always succeed at booting into Safe Mode, and that’s the only way I’ve been using this iMac for a long time now, which is quite sluggish. Sometimes it can boot normally without having to go into Safe Mode and I can log in, but often it will crash to a black screen during use at some point.

When it fails during boot, occasionally I see some odd things on the screen for a split second before it blinks to black. Here’s one colorful example: 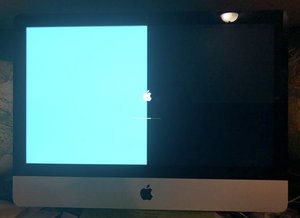 It doesn’t happen the same way each time.

Here’s another more detailed example I caught on video. It feels like it takes a long time to boot. Where you see this picture’s progress bar, that’s more than 3.5 minutes into boot. 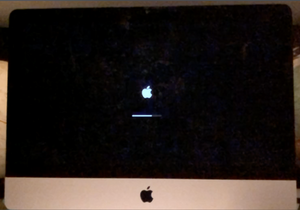 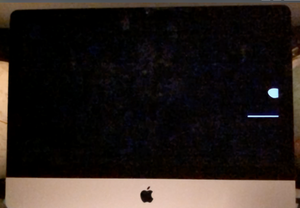 After 13 seconds of black, it then displays this alert message. 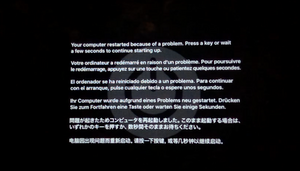 This was happening while running macOS Mojave, if that makes any difference. I later updated to Catalina, but I still have boot problems.

This video weirdness makes me suspect there is something wrong with the video hardware. Does that sound likely, and is there a way to verify that? Is there actually a replaceable video card in this iMac?

Using an external display connected via Thunderbolt3 port to the needed dongle to support the monitor (VGA, HDMI, or miniDP) Does it look the same?