screen still dim after new inverter cable AND inverter board

A few weeks ago the screen went dim on my MacBook. Could see the desktop, and shining a bright light onto it makes it evident it's still fully functional other than the screen. The screen still lit itself up sometimes, usually just for a few seconds.

So I bought an inverter cable. Disassembled the macbook by the instructions here at iFixit (such a very useful resource!). But it was worse. I could still light up the screen by shining a bright light ONTO IT. But it didn't have those few moments now and again where it lit itself up, except when I lowered the brightness to 0 and then STARTED to raise it again, there'd be a brief flash of illumination.

So I bought an inverter board. This brought it back to the former state, where the screen is dim but lights up only sometimes.

I took it to Microcenter, bought a VGA adaptor cable and asked the repair person there if he wouldn't let me hook it up to a screen just momentarily so I could see if my motherboard was the problem.

We hooked it up, and the macbook plus his monitor made a 2-screen setup. I saw my Dock and some icons on his screen, and I saw a second desktop on my macbook's screen. No dimness at all! He said "I'm not seeing a problem here." I said "I know! How disappointing!" Heh. So we figured "Must be cured."

But it was just like when you go to a doctor for some chronic pain, and while you're there the pain's gone and he doesn't see what your complaint is.

As soon as I got the MacBook home, it was back to a dim screen. I can make it illuminate sometimes by just slamming the top shut and opening it. Or by dickering with the brightness control.

I don't know what else it is. Maybe the inverter board had the same problem as the old?

Why did it light up with no issues for several minutes while connected to an external monitor? Maybe because I'd been driving about in the cold and something that was loose "jiggled" for those few minutes into place, and then jiggled loose again when I drove the computer home?

I'm thinking of buying the whole top unit, LCD and frame and all, with the inverter board and inverter cables AND THE OTHER CABLES in it. I'm thinking there's still some cable issue.

Any and all advice is welcome! Thank you!

Thanks for the input.

I've reset the PRAM and SCU. (To reset the SCU is to remove the power cord and battery then hold the power button for five seconds, right?). No effect.

Is there a picture of what I'm trying to bridge to power the thing on while the topcase is off? I want to be very sure I'm touching the right parts together...

Microcenter had a refurbished white MacBook like mine for $500. I'm thinking if I'm looking at replacing one thing after another to get this machine working, I might save myself some grief just replacing it altogether... I've had this apart and back together 3 times already. Once for the inverter cable, once for the inverter board, then the night I saw it working well at Microcenter, I thought I'd tear it down again to make sure all the connections were secure.

I added a picture to my answer. Your board won't be red, but it will looks something like this between the optical connector and fan...you'll see a power symbol with two pads in the general area shown. Give it a few tries if necessary, because it can be tricky to successfully trigger the pads. $500 is a little high for an A1181...I'd pay a few hundred more and get a 13" MBP from the Apple refurb page.

Jumpstarted it on the motherboard with no topcase attached -> no backlight.

Then also disconnected the battery connector/sleep sensor -> no backlight.

While it was still powered, I used the eraser of a pencil to drum about the relevant connections, and still no backlight.

So I don't know if I should be considering a new motherboard or a new screen unit (or a new computer ;-) ). It's still in pieces now, so if there are other connections I can test while it's open then now's the time.

Are you stating that while at MicroCenter connected to an external display, you had a reliable backlight, and you did not see it go out once in that situation?

If so, I'd reset the PRAM and PMU/SMC. If that doesn't help, next I'd probably suspect the topcase/keyboard, since these have a surprising amount of electronics in them and are sometimes related to various weird issues, including sleep mode problems. Assuming your board is an 820-2279-A, you can take the topcase off completely and power on the machine by bridging the power-on pads with tweezers to start the machine...these are right above the optical drive connector, and you'll see a small power symbol next to them. Starting it up without the topcase will tell you if the topcase is faulty (if you have a backlight, it's bad).

At the end of the day A1181 backlight issues are usually due to bad screens, but what

you saw when connecting to the external display makes me suspect there is something failing to tell the backlight to turn on under normal conditions, such as a misplaced or missing magnet in the screen frame. Maybe Lemerise would have an idea as to what that could be specifically. There should be a magnet in the middle of the left side of the screen frame. It could even end up being the board itself, because they have a lot to do with the backlight as well. I'd say you might have bought a bad replacement inverter cable (inverters themselves almost never fail), but then again the backlight working 100% with an external monitor attached would tend to rule that and most other things out, since it works fine in a specific situation.

If all of the above fails, I would then proceed to change the screen itself. You can swap the entire assembly with screen inside it as you suggest, but if it works you won't know whether it was the screen, or some other component in the screen assembly. I guess it doesn't really matter though, if you end up with a working computer. If you buy the whole assembly, just make sure to get one with a 3-wall inverter cable (again, assuming your board is an 820-2279-A). 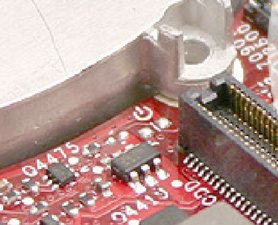 I once had the same problem with one of my 1181 machines. I had a good lightning screen when the unit was connected to an external monitor but black screen when disconnected from the external. I had to replace the logic board to repair the issue. OP should disconnect the top case and the battery charging/sleep board then try to power the unit via the logic board power pads. If it dont work then I would suspect a logic board failure.

The more I think about it, the more I suspect the logic board as well. I just can't think of any other component that would be responsible for telling the backlight to turn itself on. I'm hoping it's the topcase though, because I've seen some really odd problems caused by bad topcases.

I have trouble believing the problem is on the physical motherboard unless it is a bad solder joint and the cold contracted the soft metal and closed the separation. If that is the case then with the system on someone could take a new pencil and tap it on the board eraser side down around the backlight socket/connector and get the backlight to flash. If making the backlight on the LCD work by attaching and external monitor is consistently repeatable then I'd say the backlight circuitry itself is good and the problem must be in something failing to tell the backlight to function, my 1st guess would be either the SMC, EFI/firmware or operating system. I realize I am a newbie to the Apple architecture.

I asked Chris to try powering on to option and target modes, since that should rule out the OS (if he doesn't get a backlight in those modes, we know it's not the OS, because the machine is not in the OS yet). It's almost as if the machine is stuck in an "external monitor" mode, such as a PC laptop would have, and let you toggle through by hitting a certain function key. Although he's reset PRAM and SMC/PMU, so that should reset any such setting, although it didn't. Which takes me back to my thought about something in the laptop obstructing the backlight from kicking on...but then again it does work, just in certain situations...aarrgh! Anyway, Chris is going to jump the board without the topcase, and if anything in an A1181 besides the board is capable of random funkiness, it's the topcase, so I'm crossing my fingers for that.

Hopefully when he jump starts it with the top case off, if things don't pan out he drums the board around the backlight socket to eliminate a bad solder joint causing the problem. It would be a shame to scrap this over such a minor thing. - I just put my 2 cents in here to stay in the loop. I think it is an interesting problem. I've learned in the last year that Apple doesn't vary much in the circuits it uses to accomplish various tasks since it moved to Intel, but it seems to take great pleasure in moving where the circuits reside.

Problem solved by putting on a new top unit. So, your guesses are likely better than mine. I agreed with rdklinc's logic that going the easier (even if less likely-seeming) route first was a good idea. I kept wondering "maybe the replacement cable is bad, or the replacement board?" and also "maybe it's another wire or connector?" Also replacing one big bunch of components at once appealed, rather than trying to go piece by piece to isolate the particular part. The top unit had a tested screen, bulb, cables, board, wires, connectors all in one package.... Just needed to plug connectors onto the logic board and see if it worked. And it did.

The top part sits a bit askew on top of the bottom. I think probably the hinge in the new screen assembly unit is slightly bent. If I can talk myself into tearing this thing down just one more time, then I wonder if I can take the hinge from my old macbook screen assembly and put it into the new without too much trouble, and see if top and bottom line up better than they're doing? It opens and closes fine, I just wish the final result of all this was more like having the Book back exactly as it was (or better) before all the trouble.

Thanks for everyone's input! It's all been valuable.

I'm glad to hear that. IMO you will have no problem replacing hinges, to true it up, after all you have experienced with this machine. If you live in the US and wish to sell your old/malfunctioning screen, please, let me know replacing CCFL bulbs is one of the repairs I do.

ABCellars: "If you wish to sell your old/malfunctioning screen, please, let me know".

Yes. I don't know how this board's design well enough to figure out if there's some way to contact you about shipping and other info... I'm used to BB software where you can more easily send private messages.