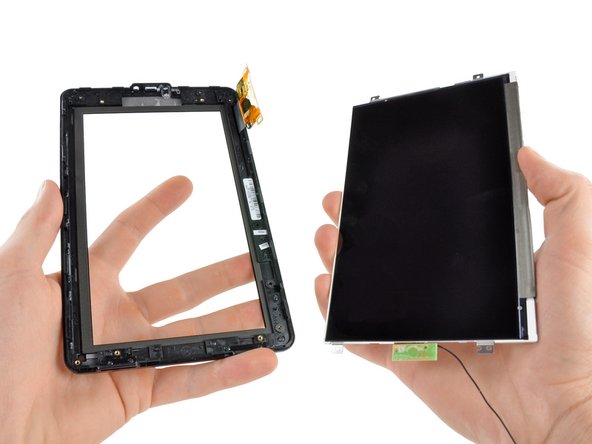 Use this guide to help you replace a broken front glass panel or digitizer in an Amazon Kindle Fire.

How long does this take?

How does that tell you how to fix the screen you are just putting the screen on so it sill cracked so how are you going to fix it now?

This took me about an hour from start to finish - taking my time to mark all the screws etc. but it may take longer if you don't have the correct tools. I agree that there should be a photo of separating the front glass digitizer from the front bezel as the true last step - it can be tricky, and the replacements I have seen don't include the front bezel. I used a razor/hobby knife to slowly peel and separate the digitizer working slowly and carefully from the inside bottom (around and behind the power button cutout) - some goo-gone or lighter fluid will be necessary to clean any old adhesive residue from the bezel as well. The front bezel has a rubberized gasket that should not be remover, so take care to see that you are not peeling that off. My last suggestion is to wear latex or nitrile gloves to prevent getting smudges on the LCD or digitizer during replacement; put them on for step 18, and until you have the frame back in place - care to keep dust out from in between during reassembly is a must!

I agree this was difficult, I used 3 different explanations/videos and this was the easiest to follow due to still frame. Thanks for sharing. It took longer than I expected but I did it

How do I know which part I need?? Do I need the lcd screen and/or the digitizer?? What's the difference?? My kindle was dropped unfortunately and I am trying to find the part to replace it with. PLEASE HELP!! People are trying to charge me 100$ to replace the screen alone, excluding labor.