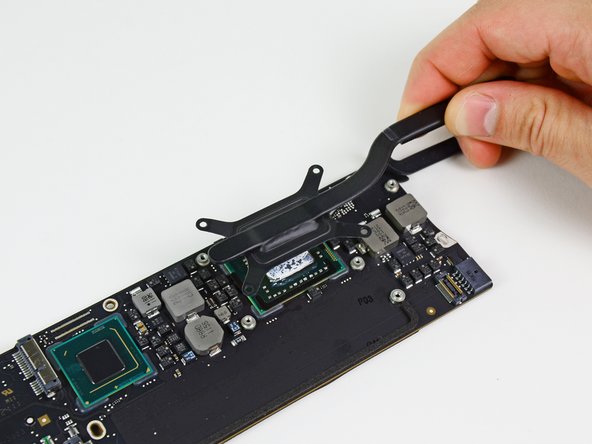 with a little bit of skills you dont need to remove the T8 screws. But be sure not to damage the cable

[|your guide was really helpfull, but I´m looking for a piece that was ripped out (I took it to a store to get it cleaned, and they trick me) and would be great if you can help me, if you have an email account so i can send you the picture. The little piece is like a chip next to the airport/bluetooth board, the tiny tiny one.]

Thank you for this, it was really helpfull, but I actually have a little problem that you can help me with. I took my MacBook to a store to get it cleaned and I think they trick me, I found out later that a little piece had been ripped out, i’m trying to replace it but I don’t know the name or where to find it, its the little piece that is next to the airport/bluetooth board, the tiny tiny one. If you have an email account so I can send you the picture, would be great if you can help me out.

No experience in computers what so ever but when my girlfriend s computer started beeping I decided to try my luck with this guide. Just took it slow and steady following the steps of the guide. Once I removed the logic board from the computer I put it in the oven for 7 minutes at 170 C. Now it works perfectly again!

Thank you for the guide, was really helpful and easy to follow!

Hi Oztrail (and any others)

I had the three beeps and tried the various simple methods to fix it - PRAM, SMC, Diagnostics, Vacuuming the inside - with no luck.

So I’ve now removed my logic board argh. Plan is to oven it.

I was just wondering before I put it in the oven if it could’ve been the thermal past that was the issue?

When I removed the heatsink it came away instantly without any resistance. The thermal paste was dried and chalky and I can’t imagine did a thing.

Is this normal? Or should I try a simple step of applying new paste before baking my board?

Any thoughts would be great!

Oh and I assume you baked without the heatsink in place, and reattached it after baking with some new thermal paste?

Thanks for any thoughts - I’ll post back my experience

In answer to my own questions above, I did remove the heatsink and baked the logic board.

Interestingly having applied the paste it is super quiet. Made me realise that before it had been really hot and noisy, so maybe it was the thermal paste causing the issue…

After reading through this procedure, I now understand why a logic board swap costs about $300 (parts + labor). You’d better know what you’re doing and be precise (and delicate). I counted a dozen steps where I would probably munge things up pretty badly. So thanks for keeping me from destroying what would be, otherwise, repairable. :D

Thank you for posting these repair instructions, I successfully installed a new logic board on my wife’s Macbook Air….couldn’t have done it without your detailed instructions. Cheers, Tom

Really well done guys. Thank you very much. Worked for me…

Thank you so much for this detailed guide. I was able to bring back to life my MacBook Air pretty easily following your instructions.

Took my MacBook Air to certified Apple for repair. Advised $900 repair. I read this review baked the logic board at 180 degrees for 8 minutes and it’s like new. Had no thermal paste so used toothpaste as a substitute till thermal paste arrives. Thankyou sooooo much

What does the baking of the logicboard do? Thanks.

It quite possible dries the CPU. My MacBook Air has now been running faultless for 3 weeks. Just ensure you remove the heat sink and clean the paste off the cpu. then after baking re apply thermal paste.

As a 12 year old who was trying to fix his second laptop, im fairly impressed that I was able to complete these steps with ease. Macbook is now running after GPU died, leading me to bake the logic board to re-solder the connectors. Thanks for the help!