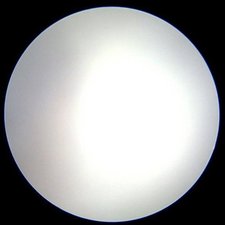 No power, no charge, no battery indicator. Dim green LED on Magsafe

My lady's MBP (13", 2009) is quite dead. The night before, she said it was exhibiting some poltergeist-y mouse movements and application opening. It was also running slow, apparently. I checked it out the next morning, running DiskUtility which repaired a few permissions/errors (don't remember exactly) and I didn't have any issues with input apparitions or phantom keystrokes. I remember it was running a little warm for my tastes, but nothing crazy. I figured it just needed to get some dust cleared out of there.

Neither of us know of any water damage, and we're the only two in the house.

After my efforts with DiskUtility, I sat it down on my other desk and continued working with my actual "work" projects (Hackintosh file system "repair" and wiping a Chromebook, blah blah blah). My guess is that since I didn't plug the charger in, it ran out of battery. I assumed it went into sleep more or whatever. I don't remember what the battery level was actually at before I turned away from it... "Whoops, forgot to plug the charger in!", I said to myself.

Plug the charger in, went back to my business. Minutes later, I try to turn it on.

No fans, no screen flashes, no noise at all. Completely dead.

I took another break from my work and started searching online. Many accounts of promising battery-unplugging and magsafe unplugging exist where people with very similar issues have fixed their problem in a matter of minutes. I opened the bottom of the MBP and tried these. Nothing. I check the battery charge status button on the side. No lights at all.

We've got two chargers (one for bedroom, one for living room) and neither did anything different. I checked the output of both with a multimeter and they both seem correct. Wiggling the connectors or cables does nothing. The contacts were quite clean for both chargers and the magsafe port itself.

At this point I noticed the dim green light on the magsafe connector. If I flip the connector and look from an acute angle, I can see dim orange. I find that if I plug it in over and over again, it eventually flashes full/bright orange, once quickly, before being dim.

I looked up the SMC reset... but duh, the computer won't turn on at all so these keystrokes do nothing to bring it to life.

I found some people mentioned replacing the DC-in board. Cheap fix, so I ordered a part from eBay. It arrived a few days later, but had no effect on the computer.

A year ago or so, I replaced (at great cost...) the battery because the old one had bloated just enough to hinder the use of the trackpad click. I tried tossing the old battery in to see if it helped. Nope.

So I left it for two nights without the charger or battery plugged in. Nope.

So I left it for another two nights with everything plugged in. Nope.

Today I found a page that shows the solder pads (near the keyboard connector) that can be used to turn the computer on without using the power button. Nope.

So I'm pretty lost right now! We've already budgeted for a used replacement of sorts (something newer, maybe a 15") but ideally I could figure this one out and everything would be back to normal. Logic board replacement, even from eBay, is prohibitively expensive - almost the cost of the exact model laptop (pre-owned, of course).

To close: nearly every instance of this machine's problems (from other owners, online) have been solved with simple action... but nothing has worked for me! What gives? Did I miss something, or is the logic board just... a goner?

So intermittent light on the magsafe.

This video directly applies to your older board where they placed the onewire circuit components in the corner where moisture comes in. Let's rule this out before even bothering to troubleshoot anything else because it is such a common problem. This is a fairly high resolution video with good images of the exact area I want you to measure, and follows along in the schematic to explain what's going on.

Excellent resource! Weird that I didn't find it during my searches...

Looks like I should probably find some test points for the power rails. Will do some searching now!

The slowdowns and random freezing are from failing MCP79. Your MCP79's clock circuitry is powered by PP3V42_G3H, which is now is shorted to ground through MCP79. The fix to this is to replace MCP79 with a new one, but this is most likely outside the scope of what you can do at home without high end professional BGA rework equipment.

I know when the PP3V42_G3H rail ripples badly enough to kill the MCP79 on 820-2530 board that many other issues will be present after replacing that chip. The proper solution for you is to spend $177 on a replacement board if you wish to repair the machine; otherwise just junk it.

This is a link to a board.

This is a link to what misery you are in for if you try to repair this problem on your machine.

[EDIT: Looks like we cross-commented, hadn't received an email notification of another comment and didn't refresh the page!]

According to the schematic,

Interesting. I know they have a problem with... failing... but figured that meant "funky graphics/artifacts" or lack of video as opposed to eventual, full-on death.

F7000 never dies, even in cases of lightning. Please re-measure! Please also measure voltage on both sides of F7000.

Did replacing the logic board do it? I've replaced the i/o board as you did; the logic board; and even the keyboard, thinking maybe there was some kind of short in the on/off button. Still dead.

Symptom is bright green magsafe turns to very dim green after a couple minutes. Machine does nothing.

FWIW, After replacing all of those expensive components, the cause turned out to be corrosion in the circuit board on which the charging level lights are located -- super cheap and easily replaced.

Hi Simon. I have same issue as Alec J. I checked out video in zzz's post but mine is Mid 2012 and I can't find where to solder the wire. Do you have any idea?

I did not need to solder anything: the battery indicator board is a complete unit, available on ebay for about $8. http://www.ebay.com/itm/BATTERY-INDICATO...

oh, my case may be different from yours. When I plugged in, there is very dim flashing green and orange light. No battery indicator. My case is 99% as same as Alec J.'s case

I have the exact same problem, any ideas anyone?

Does this apply to Mid 2012 Macbook Pro non-retina?

My unibody laptop had these symptoms... But none of the solutions below here worked this time:

- battery would not charge

- magsafe was not working properly and not charging battery

- battery indicator light did not work

Hope this helps someone...

Update: the laptop did turn on a few times... But still not charging via the plugged in MacSafe charger. Once the battery reached about 30%, it shut off abruptly... Not shut down! Since then, it returned to square one. ..& would not turn on again

Not sure if this is of any help, but I just fixed a dim green light by unplugging the “battery indicator cable connector”. I went through disconnecting everything one by one and connected the charger cable after each thing I removed until the charger turned bright green, might be worth a shot. At least this way of tracking down the problem worked very well for me.