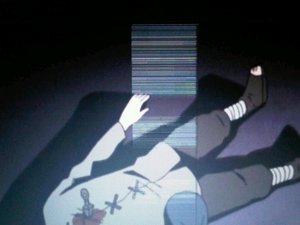 After following the LCD replacement guide, I powered up my computer and was greeted to a grey screen with an apple logo. I thought all was well, however, upon entering the main screen, I noticed that I had an two inch verticle strip which had some horizontal lines that fluctuate depending on what color the screen is (that's the best I can describe it). If there is mainly white, then I have no issues, but certain colors caused the anomoly to appear more often than not. I have a feeling that during the reinstallation process, I may have done something to disturb the connection to the lcd (the cable connecting the lcd to the motherboard is tiny). Could this have anything to do with it? If so, is it possible to just replace that cable?

This looks like a cracked LCD. This is not a symptom of a bad LVDS cable. Here's the guide on how to replace the LCD on this laptop.

Added picture. I did that right after I fired it up, but I didn't notice any damage. Was it possible I may have kinked the cable?