Reapplying Thermal Paste, Any Danger of Shock from the PSU?

Hi I am just a little concerned about getting shocked from the PSU while opening the Mid 2011 Macbook Air. Do I have anything to worry about? Does the same apply to all laptops… do they get their power from the brick? Thanks! 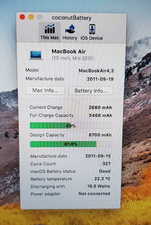 The PSU is the MagSafe charger, there is no internal power unit. Just follow this needed guide from here: MacBook Air 13" Mid 2011 Repair and you’ll be fine.

What are you trying to do?

@riverofwind - While redoing the TIM might be something to look at your issue is much simpler! Your battery is too old!

Think of it this way would you eat a bag of chips that had expire back in 2011? Even if its sealed up the cooking oil has gone rancid by now.

Batteries fail in to ways:

In your case its age!

Well your battery is the issue here. The age is the problem, this is the original battery the system came with back in 2011!! The cycle count is not the only measure thats important.

This of it this way… If you bought a car back in 2011 would the lead-acid battery still be good today? Not likely!

I would focus on this Vs the thermal paste.

I am going to reapply the thermal paste hoping to decrease CPU temperature it’s pretty out of control now reaching 95+C under stress. Thanks for the response. Are most laptops configured in the same manner with the PSU in the power adapter?

@riverofwind - I would recommend first installing a good thermal monitoring app like TG Pro. Before you go to the extreme of replacing the TIM I would first make sure the fan and heat sink fin area is clean of any dust or debris as the lack of air flow will cause you issues!

While you might not think it, a weak battery will also cause the system to heat up as the charging logic runs hard trying to get the battery charged but it can't.

I would also get a better view of things, install this gem of an app! CoconutBattery take a snapshot of the apps main window and post it here for us to see Ajout d'images à une question existante

Follow this guide MacBook Air 13" Mid 2011 Logic Board Replacement be careful with the heat sink screws! Use some thinner around the screw heads to beak the seal, I often get a system in which the mount stud was snapped off the logic board which would be a shame!

And Yes, todays laptops all use external power units,

Thanks! So no danger of shock from any laptop right? Just all-in-ones and desktops? Also already did TG Pro and I will definitely see if there's any dust buildup.

@riverofwind - The only power is within the battery which if you follow the guides disconnect first! No AC power risks here!

I've been fixing Mac systems for years, I've never gotten any zap from a 2010 onwards laptop. The older 2009 and older CCFL based backlight do have a high voltage that can give you a small tickle.