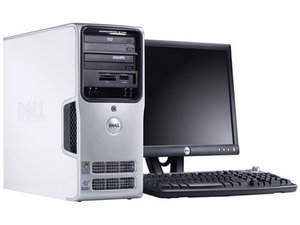 The official memory capacity per Dell is 4GB. However, some boards are not able to fully utilize all 4GB of installed RAM due to a major chipset flaw on some boards.

Use of 800MHz modules will result in a POST error.

IMPORTANT: Some systems only register 3.5GB due to a chipset (i945) bug, but accept 4GB of installed RAM. It is not known if all systems are affected, but certain boards are more known for the problem then others - including the system the author had at the time. The impact is negligible to nonexistent in most cases with bad systems.

How to identify the problem: Install a dGPU that does *not* require shared RAM as a known fact (these shared RAM cards exist, but are rare) with 4GB installed. Impacted systems will show the 500MB loss with and without a GPU installed in the BIOS.

Dell used 2-3 board part numbers, with 2 models being known. The following boards exist for this machine (well, at least what the Wiki creator knows about):

Systems with the 0WG261 board are the most likely to be affected by the 3.5GB RAM bug as it is 5150 specific and the bug does not exist in the E510. This is reportedly fixed with the 0HJ054 motherboard, since it is shared with the E510.

This machine uses SATA I, meaning it is limited to 1.5Gb/s for throughput. You must use a backwards compatible SATA III drive or a controller card that bypasses the bus limited SATA interface.

This machine has 2 limitations for processors.

Run CPU-Z and verify your board before doing a Pentium D upgrade. You MUST have the correct board for it to work correctly! These systems will be harder to come by.

The machine uses a mostly normal power supply. Dell uses a standard power supply, but the case is slightly larger. This will not impact replacement, but a small unit may leave a gap. This does not affect the system functionally if it happens. It is best to accept this then find a genuine unit as most of them will fail due to bad capacitors.