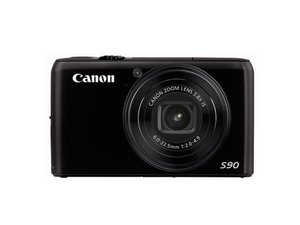 back screen black / no longer working

I have an old version of the powershot (s90) which took amazing photos for about a year and then the back screen suddenly stopped working.

Trying to pinpoint exactly when it stopped working - I think it was when I downloaded photos from the memory card to computer, didnt eject memory card properly from computer, then put it in the camera and the screen has been black ever since, thought this could be a co-incidence?

the camera still works perfectly and takes photos - but as i have a non working back screen i have no idea what the photos are like and its too difficult to guess frame etc when you cant see anything.

is there a quick fix? I live in shanghai and there doesnt seem to be any canon repair shops here where i can take it to? - is there a way of re-booting it or resetting via the internet etc??