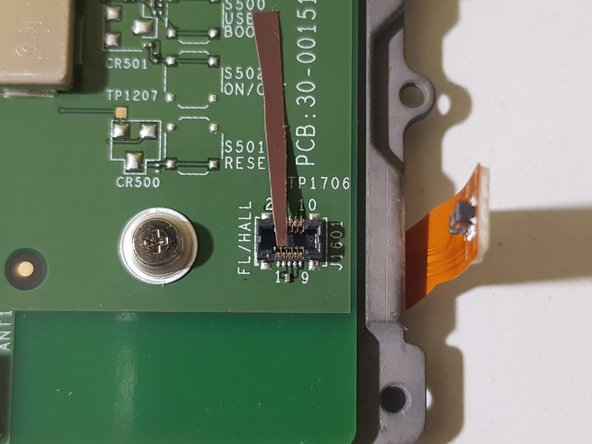 If your Kindle does not respond when pressing the power button, but wakes and goes back to sleep sporadically, this is the result of a malfunctioning cover sensor, which is a hall effect sensor located on the same flex cable as the LEDs for the frontlight.

On some e-readers, like those from Kobo, this sensor can be disabled in software, but disabling it on a Kindle requires a hardware modification that can be undone relatively easily.

Normally, fixing this would require a replacement of the entire display assembly, but what if you wanted a temporary solution to tide you over until you are able to replace the display assembly, or upgrade to a new Kindle (or other e-reader), and have the skills and tools to take apart electronics?

This guide requires that your Kindle remain powered on but in sleep mode, and that a plastic opening tool, and a PH000 screwdriver are used. You will also need to react quickly to disconnect the frontlight before it goes back to sleep again.

This guide will not work with the original Kindle Paperwhite (model EY21) that was released in 2013 as part of the 5th generation of Kindle e-readers, as its cover sensor detection mechanism defaults to to assuming that the case cover was closed when the frontlight cable was disconnected.

It does, however, work with the 3rd iteration (model DP75SDI) that was released in 2015 as part of the 7th generation of Kindle e-readers, as its cover sensor detection mechanism seems to retain the last state before the frontlight cable was disconnected.

To reassemble your device, follow steps 1-3 in reverse order.

To reassemble your device, follow steps 1-3 in reverse order.

Brilliant! I just went through the process of disconnecting my hall sensor harness to fix an intermittent wake/lock issue. It worked, but i didn’t realize I’d nerfed the backlights until after getting it all reassembled. Thankfully found this guide and it worked perfectly.