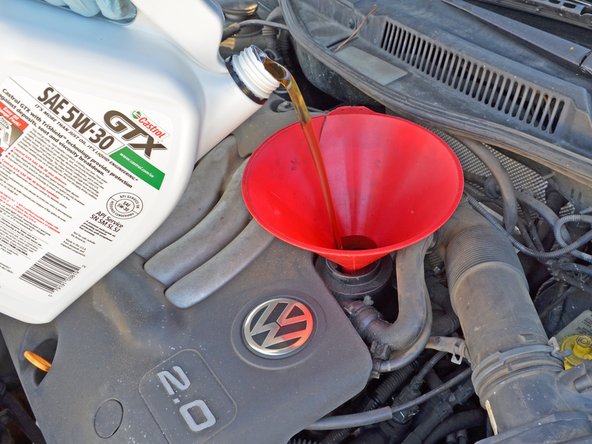 Change the oil in your Mk4 Jetta equipped with the naturally aspirated 2.0 liter engine. TDI and GLI models have different engines, and may have different procedures and requirements, such as oil capacity.

For years, 3,000 miles was the correct interval to wait between oil changes, but that is no longer the case. Conventional oil in today's engines can easily last over 5,000 miles between changes. Synthetic oils are even more durable, maintaining good engine performance beyond 10,000 miles.

Thanks for the article it help me a lot

Be careful on step 22, to much oil on this picture.

You need to be on the top of the bent length, NOT ABOVE.

The stick is stained above the top bend. It doesn’t have oil coating the stick, so it is perfectly fine in the picture. Not too much.

22 ft-lb of torque when tightening the oil plug, per the Bentley manual. I used to just tighten it until I thought it was decently snug, but always had leaks. 22 ft-lb works well.